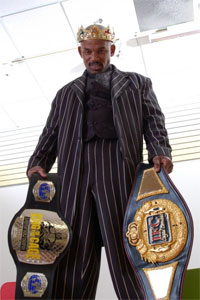 After years of keeping us entertained with his golden thong, pimp cane of wonder and eloquently designed zoot-suits, Shonie Carter has called it quits tonight in Tel Aviv, Israel at Israel FC. Mr. International has lost for the fifth excruciating time in a row. Jeremy Knafo, a dude who is more mysterious than Greg Nagy and 200% less experienced than him — alright guys, Shonie Carter lost to a dude who was 0-0. ‘That’s not a good way to go out’ would be the most obvious thing that could be said right now. This is what Shonie had to say after his decision loss at Israel FC:

“You may all have just witnessed my retirement, but it has been my pleasure to give this world, all of me.”

I met Shonie when he came to Bellator 25 in Chicago. He was rocking ten scantily clad chicks on each arm while wearing a suit that would make Prince proud. Shonie Carter, like Jens Pulver, cannot not be loved. He was exciting, a trendsetter, but most of all he was Shonie. So everyone, please pour out a little bit of your pimp juice of choice today for Mr. International and watch this infamous clip of Shonie Carter teaching GSP how to walk like he should walk.