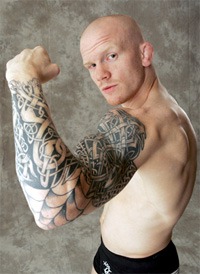 Aoki actually called Hansen just after his Dream 10 appearance (which he rocked an outfit designed by Where’s Waldo). If you don’t remember Joachim Hansen, then I suggest you check out his Dream 3 fight with Eddie Alvarez which could have possibly been the best fight in MMA history. It’s also important to note that Hansen already beat Aoki in Dream 5 but lost to him back in the good old Pride days (RIP). Technically, the Dream 11 meet will be a rubber match. That’s your new word of the day, ‘Rubber Match’.

Shinya Aoki vs. Joachim Hansen, be sure to set your TVs to ‘epilepsy’. [Source]