Shinya Aoki was fired by his own gym 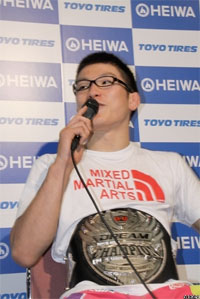 If you were up last week to watch Dynamite!! 2009 at 780,300,640 am in the morning then you probably saw the rawesome display of arm breakry when Aoki snapped Hirota’s arm and twisted it clockwise as a little bonus for not tapping. Afterward, he gave Hirota the middle-finger and continued to run around the ring with his arms extended like a miniature airplane. Nightmare of Battle has translated a statement issued from the gym Shinya Aoki teaches at and it looks like your boy has been dismissed from his instructor position. Bummer.

On the Paraestra Tokyo (the gym which Aoki belongs to) website a written message by higher-ups Yuki Nakai and Taro Wakabayashi relating to Aoki’s actions after his fight with Mizuto Hirota on NYE was posted today.

As the leaders of Aoki they apologize to everyone involved and as punishment Aoki has been dismissed from his role as an instructor at Paraestra Tokyo. He will also accept any punishment from the organizations involved.

There’s also a message from Aoki which says that he apologizes from the bottom of his heart for his unsportsmanlike behavior after the fight. He will start over from scratch (don’t understand what he means) so that something like this doesn’t happen again.

Shinya Aoki breaks arms like you get dentist checkups: occasionally. If you haven’t seen when he broke some dude’s arm at a grappling bout or when he literally ripped this dude’s arm off earlier in his career, you should definitely check it out…before you eat.  [Source]