Shane Carwin wants to kick it with you, seriously he does

Legend has it that every time Shane Carwin unleashes his ground and pound, it registers on the Richter scale. Carwin grapples with hurricanes. One day Shane Carwin dropped one of his gloves in Arizona, the result was the Grand Canyon. He drinks from volcanoes and stuffs earthquakes in his roast beef sandwiches. Carwin doesn’t use oxygen, the dude breathes pain. Whenever Shane Carwin isn’t riding shotgun with Voltron, he occasionally visits earth to compete in the UFC. With a record of 12-0, the longest he’s ever been in the cage was two minutes and eleven seconds. I can’t even start my car in two minutes and eleven seconds. The UFC heavyweight interim belt holder loves you so much that he wants to fly you out to kick it with his entire family on his boat in Greeley, Colorado.

Check out what Shane Carwin said on his official site in order to make sense of the ginormous generosity.

I wanted to thank my sponsor Malibu Boats for making a dream of mine come true. So what I cane up with is this:

I will fly one person from anywhere in the Continental US to come to Greeley and go boating with me, my family and my VLX Wakesetter by Malibu Boats. The winner also gets two nights in a hotel and $100.00 spending cash. We will hit the lakes and have a blast.

To enter you have to follow Malibu Boats on Twitter.com (www.Twitter.com/Malibuboats) and tweet this “#Boating is Better with @Malibuboats” if you tell them VLX Shane sent you you will be entered to win a secondary prize.

This is a great company who builds an exceptional product. I am proud to be on Team Malibu Boats.

I will select the winner when they reach 5000 followers so spread the word. They only have 1800 followers right now so this is a big request for a big prize.

It’s an offer that most of us simply cannot refuse. You can finally live out your dreams of arm wrestling Carwin only to have every tendon in your elbow rip to shreds in a matter of seconds. [Source] 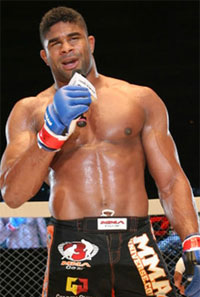 Ubereem says he's the only person in MMA that can defeat Fedor
← Read Last Post
The Rampage/Evans conference call to end all other conference calls
Read Next Post →
Click here to cancel reply.