Shane Carwin can simultaneously rupture your spleen and then construct a viable way to create a water distribution model on Autocad. Sorry Obama, but that’s change I can believe in — I just don’t want to feel any of it. Some MMA fans ask fighters to punch them in the stomach while their half-baked friend films it on Flip Cam. We’ve seen it before with Kimbo Slice, however based on this logic, Shane Carwin no fans. To this day, I’ve never seen anyone request to get punched on any section of their body by Carwin.

A long-time friend of MiddleEasy, Shane Carwin has decided to call it quits today via Twitter. Man, we’re going to miss Carwin. His hands are the size of your hopes and dreams when you were a teenager. UFC actually had to create custom gloves just so he could fit his meat hooks inside of them. Massive thanks to Carwin for blowing MiddleEasy up years ago when we first started. We absolutely appreciate it and we hope that whatever path you decide to choose in life is met with a handsome reward. 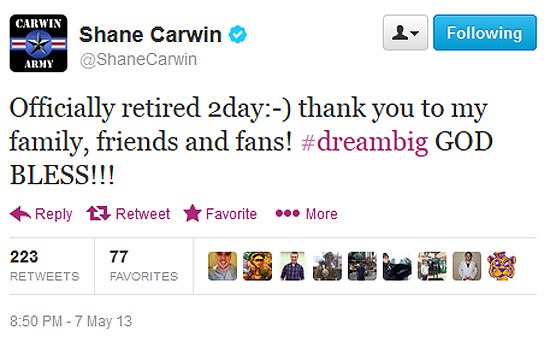