Sexyama says Leben isn’t a big enough name for him, threatens to pull out of UFC 116

We all call him Sexyama, but these media outlets insist that his name is Yoshihiro Akiyama. Once again, these guys are spreading rumors and when it comes to a man’s inherent ‘sexiness’, it’s the worst type of rumor. On Tuesday, the news dropped that Wanderlei Silva was out of his UFC 116 bout against Sexyama due to fractured ribs (although Wandy tried to convince the doctor that he could still fight despite his injures). Within hours, Chris Leben stepped up to the plate, the same Chris Leben who fought at The Ultimate Fighter Season 11 Finale just three days prior (what other Leben do you know?). According to an interview with the Korean website Daum.net (translated by Fighters Only Magazine), Sexyama isn’t happy with Leben as a replacement and just may pull out of UFC 116.

“I am not pleased with the change. There are just ten days left until the contest for me to determine [Leben’s] threats and the time is insufficient to establish a tailored gameplan. Leben is also not as high-profile as [Wanderlei] Silva and that does not help me.

“If there is to be a replacement I was hoping for a big name.”

“I spent one year preparing hard for this fight and this news has come as a big disappointment, my motivation has waned. I do not know yet what will happen. .. In the worst case, I will not take part in the [UFC 116] event. We are working hard to resolve this issue.”

Once again, we have another obstacle to a fight that was originally supposed to go down at UFC 108. Here, I’ll make the joke for you since we’re going to hear it endlessly repeated on message boards this week: ‘Akiyama is too sexy for Leben’. Take that Right Said Fred. [Source] 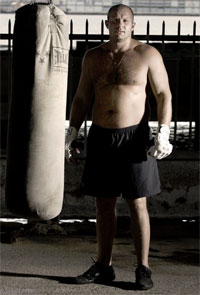 Strikeforce: Fedor vs. Werdum will air on HBO in Brazil
← Read Last Post
Wanderlei Silva says he may be out until 2011
Read Next Post →
Click here to cancel reply.