Knowing you’re going to fight Fedor is probably just like being told you’ve been assigned to chauffeur Naomi Campbell around New York City. You can train for every possible scenario, but in either situation, you’re going to get caught with an overhand right you never saw coming and spend the rest of your evening wondering what you could have done to avoid it. Most of Fedor’s previous opponents never had successful careers after facing him. Some have even been forced to apply for part-time jobs as police-officers in Bettendorf, Iowa.

Brett Rogers lasted longer against Fedor than Tim Sylvia and Andre Arlvoski combined, but eventually he met the same nuclear-tipped overhand right that gave Fedor victories against all 3 of them. Regardless of that, Scott Coker thinks that Brett Roger’s effort was enough to earn him this title shot against Ubereem.

“Brett Rogers is a guy that lasted one and a half rounds with Fedor (Emelianenko), where a lot of others have been getting annihilated in the first minute, We feel Brett’s qualified and we’re happy to put the fight together.”

If my college professors thought like Scott Coker, I probably would have graduated magna cum-laude from Harvard based on my effort in coming up with creative excuses for why I never did any work. Instead, I don’t even know what “magna cum-laude” means. I just know that if it’s on your resume, it automatically gets you a better job than sitting on my parents couch…making sure the carpet stays vacuumed. Whatever. At least my parents have Showtime and I can watch Ubereem’s return to defend his Strikeforce HW belt on May 15. Take that Nassau Community College! [Source] 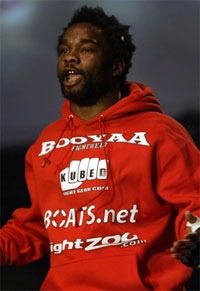