Thiago Santos and Glover Teixeira are not giving up on earning the next title shot.

The pair will headline the UFC Vegas 13 card on Saturday in a pivotal light heavyweight bout with the winner initially expected to challenge current champion Jan Blachowicz for the title next.

However, things took a different turn when UFC president Dana White revealed that middleweight champion Israel Adesanya would be moving up to face Blachowicz next in a super fight.

That said, Santos believes nothing is set in stone with regard to who will get the next shot and that a big performance on Saturday could change things up.

“… We will see [if I can earn the next shot over Adesanya with a good performance]. I know Dana White spoke about Adesanya but no one knows. He don’t have contract, no one knows what’s going to happen. I need to do my best this Saturday. I need to win my fight and then after that, we will see.”

Teixeira is in agreement with his fellow Brazilian.

The 41-year-old is on a four-fight winning streak and was hopeful that a win over Santos would earn him his second crack at the light heavyweight title.

However, he, too, believes a big performance could steal the title shot from Adesanya — and he’s even ready to trash talk his way into it.

“Yeah, definitely. Everything’s possible,” Teixeira said. “We’ve got to focus on the fight and with the title fight, we’ll see what happens. With a great performance, I could be right there in the title challenge.”

“Everything’s possible. We’ll see after this fight. We’ll go over there and make some noise. I never really talk too much sh*t but if I have to do a little bit to promote this fight and take Adesanya out of there and get the title fight, that’s what I’m going to do. Get him back in the 185 division.”

For now, all anyone can do is speculate.

But what is certainly for sure is that Santos vs. Teixeira promises to be one heck of a main event which is very unlikely to last the full 25 minutes. 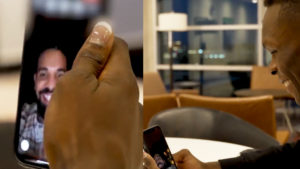