Sandro vs. Omigawa II will probably go down at Dream 16 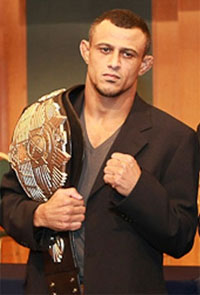 Exactly this time last year, everyone who stayed up until 3:30am found out what exactly a ‘Must Decide Split Decision’ was. At Sengoku 9, Marlon Sandro and Michihiro Omigawa fought a rather even-sided battle (although I’m sure a lot of you out there will beg to differ). In the end, this bout (which took place in the third round of the Sengoku Featherweight Grandprix) went to the judges after both fighters managed to retain their consciousness from fifteen minutes of straight bludgeoning. The scores were 30-30, 30-30 and 30-29 for Marlon Sandro. In any other logical circumstance, this would undeniably result in a unanimous decision win for Marlon Sandro. However, the Sengoku Featherweight Grandprix was governed under the rules of a ‘no tie/must decision’ system to prevent the tournament from being halted by a potential draw. Essentially, this meant that judges were instructed to score the bout with the ten-point system but in the event that their scores resulted in a draw, they would be forced to decide a winner from the statistical tie. Yeah, a year later it still doesn’t make any sense. The two judges who scored the bout ’30-30′ unanimously decided that Omigawa won the bout. Marlon Sandro’s superhuman-like 14-0 win streak was over due to a technicality that would only happen in Japan.

In an interview with Tatame Magazine, Marlon Sandro stated that he will be on the overly stacked Dream 16 card and there’s a good chance he will be able to avenge his loss against Michihiro Omigawa.

“I have a fight scheduled for September, in the Sengoku x Dream event, only I still don’t have an opponent. I couldn’t fight at the end of last year at the fusion of the two big Japanese events, but this year they’re doing it in September and I’m already preparing, although I don’t have an opponent. I believe I will face Michihiro Omigawa who is fighting for Dream and is the only guy to beat me, so I think they should give me the rematch.”

The Dream 16 banner that surfaced last month revealed an epic cast of potential fighters that will compete in the event which include Kid Yamamoto, Minowaman, Shinya Aoki, Mizuno, Takaya, Sakuraba, Mousasi, Caol Uno and Tokoro. If you don’t recognize all of those names, Bloodstain Lane will probably make a Youtube video aimed at destroying your self-esteem. [Source]