It’s been fifty minutes and seven seconds since Canada’s Ryan Jimmo tasted the sweet maple flavor of victory by way of stopping his opponent – and it’s those last seven seconds that really matter. The headline says it all: Ryan Jimmo now has a UFC Striking accuracy of 100% and is tied for the fastest KO in UFC history. It’s because of Jimmo’s fantastic punch delivered to Anthony Perosh’s face on the prelims of UFC 149 that the TRT deprived Todd Duffee is no longer alone in the annals of UFC history. So props to you, awkwardly robot-dancing Ryan Jimmo, you’ve boogied your way into the UFC record books AND created a new meme for us all to enjoy in less than seven seconds. The master would approve. 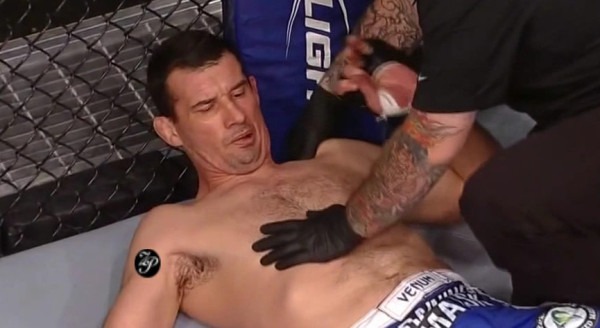 UPDATE: Technically Duane Ludwig has the fastest KO in UFC history that’s recognized by the UFC, but he confusingly doesn’t either. Remember this from Keith Kizer to MMA Junkie last year:

“The ruling is that it stays at 11. There’s no legal avenue to overturn it…I did tell [Ludwig’s] people. I timed it myself with a stopwatch. It was eight seconds. Officially, it’s got to stay at 11 seconds, but unofficially, it could be at eight.”
Although it appears just four seconds elapsed from when the time clock started and referee Mario Yamasaki intervened, Kizer said the official start of the fight was earlier.

“If you use a stopwatch, from the time the fight starts to the time that Mario grabs Duane, it’s about 7.9 seconds. Why the official timekeeper had it at 11, I don’t know. But it wasn’t 11, and it wasn’t four, either.”

This is like a slightly emotional rollercoaster that I never wanted to get on.

The Hector Lombard Frate Trane has been derailed by Tim Boetsch
Read Next Post →
Click here to cancel reply.