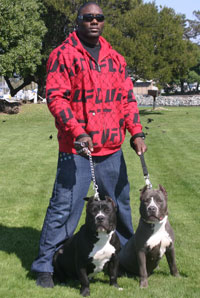 Sometimes when it’s Saturday night and I know half of you will not read this until Sunday morning, I like to start off an article with a bunch of insignificant stuff. Like this past week I’ve been slumbering in a sleeping bag. It’s really cozy inside. Now I know how beans and rice feel when they’re wrapped up in a burrito. If you look at science, a tortilla is just a sleeping bag for beans and rice. See, in order to get to the rest of the article you have to read about how a sleeping bag is a human tortilla. I had to force that thought on you before I break the news that Rumble Johnson is officially out of his March 21st bout with John Doomsday Howard at UFC on Versus.

ProMMANews is reporting that Rumble Johnson is sidelined with a knee injury and will unfortunately not be able to take part in probably one of the most explosive grudge matches since Kongo vs. Mir (which ended horribly for Cheick Kongo). Rumble called Doomsday, Josh ‘Coward’ Johnson when Josh turned down a fight earlier in his UFC career with Rumble because he felt he needed more experience. After Rumble’s UFC loss to Koscheck, Doomsday coined the moniker ‘Crumble Johnson’. The beef is real and it looks like it will have to be put back in the fridge to marinate a little more. Damn. [Source]