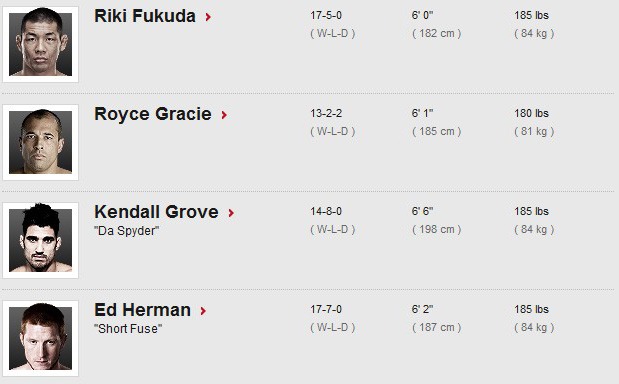 Unlike Mark Pavelich who has an entire fighting organization he can sell, all I’ve got is some Ken Griffey Junior signed baseball cards, some knee socks, and cleavage. I don’t think I’d net more than a couple hundred bucks for the entire lot if I tried to sell it on ebay. Darn it. I wish I had something I could sell for seven figures. Who am I kidding? I would be happy to sell something for four figures right about now. It’s getting harder everyday to fill up my little blue Hyundai’s 11 gallon gas tank on my government peon paycheck and MiddleEasy salary.

Royce Gracie wants to sell something for seven figures, too. According to a recent interview with Fighters Only magazine, Royce wants to fight at UFC Rio in August, but he will only do it for a cool million dollars.

“Matt Hughes in the Octagon in Rio would be ideal. He’s the one I’m after.”

I’d like to see Royce get those seven figures to fight at UFC Rio. That’s a whole bunch of cash to stuff in a purse. I don’t have a fight purse, but I do have a purse I carry around because I’m a girl and that’s just what we do and right about now that purse only has about two digits left in it until payday.[source]

If you have an extra $3.2 million, you can purchase Maximum Fighting Championship
← Read Last Post