Roy Jones Jr. is preventing Roy Nelson from fighting in the UFC 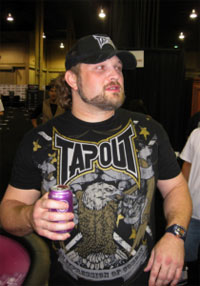 In science’s constant pursuit of finding a force to halt the seemingly unstoppable object known as Roy Nelson’s belly, Roy Jones Jr. may have made a significant scientific breakthrough, and now he’s seeking monetary compensation for it.

Square Ring, Inc claims that all bouts that occurred in The Ultimate Fighter Season 10 breached his contract and are seeking over $10,000 in punitive damages. After UFC 122, Dana White chimed in on Roy Nelson’s contractual issues the only way Dana can, with a few expletives sprinkled in for good measure.

“These guys go out and sign with these rinky-dink little promotion companies and sign these bad contracts, and let’s just say Roy Nelson is involved in a bad contract right now that he had before. There’s a couple of different organizations out there that do it.”

“There’s organizations that are locking these guys up to the old-school boxing contracts. The contracts that King and those guys were doing back in the 60s, 70s and 80s where they have options on top of their options – so your contract never ends with these guys.

Until Roy Nelson irons out whatever legal problems he (and ZUFFA) have with Roy Jones Jr. and Square Ring, Inc, he’s essentially prohibited from competing in the UFC. If you’re a legal jargon aficionado, you can read more of the lawsuit (and counter lawsuit) here. However, if you want to see the similarities between Jon Kitna and Michael Bisping, I have you covered. [Source]