Rousimar Palhares is sorry he accused Nate Marquardt of greasing 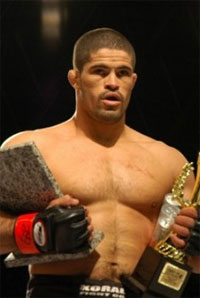 Last night I jumped on my bicycle, rode over to a local pub and took a seat next to Phil Baroni at the bar to watch UFC Fight Night 22; it was one of the better decisions I’ve ever made. On the other hand, attempting to ride my bicycle home after an endless onslaught of shots compliments of the ‘New York Bad Ass’ proved to be one of the worst decisions I’ve ever made. Colliding with everything in my path on the way home and falling off the bike a couple of times which would explain the bruises on my hip and scrape on my palms, but how I ended up getting with a pocket full of uneaten tacos is beyond me. That, in addition to making it home and faceplanting as soon as I got through the door made this one of the best nights ‘evah’. The tacos also made for an above average breakfast, despite being cold and messy.

Around the time the entire bar got lit, we watched Nate Mardquardt claim one of the most bizarre victories we’ve ever seen. Nobody could comprehend why Rousimar Palhares starting giving the referee a dissertation on leg moisturizers in the middle of his fight with Nate the Great. Not only were Mardquardt’s legs dry, the commission claimed they weren’t even sweaty. After the fight, here’s what Palhares told MMAJunkie.com.

“I’m very sorry for the accusations I made, Nate Marquardt did not cheat in any way, and I’m very sorry to him and his team for my actions in the fight.”

In retrospect, he probably should have just waited until the end of the round to inform the commission. Jamie Varner and Josh Koshcheck remain the only two fighters to ever successfully call ‘Time-Out’ inside the Octagon in the middle of a fight. The moral of the story is, if you need to tell the referee something in the middle of a fight, make sure you don’t do it in Portuguese while the former king of Pancrase is dropping sledgehammer-sized fists on your face. Rousimar’s poor judgment ultimately earned him a loss he’ll end up regretting more than any other in his career, but we hope he bounces back and takes out all his frustrations on his next opponent. [Source]

So who was that guy that was choked by Josh Koscheck on the TUF 12 preview?
← Read Last Post
Ray Mercer is out of his King of the Cage bout against Ron Sparks
Read Next Post →
Click here to cancel reply.