Rose Namajunas Predicts Another Victory Over Joanna Jedrzejczyk At UFC 223

During her reign as champion, Joanna Jedrzejczyk always tries to get into her opponent’s head, famous for trash talk during weigh-ins, and press conferences. Nothing was changed during her first fight with Rose Namajunas; she questioned her mental health by bringing her past during the leading up their fight and poke at staredowns, including her intense weigh-ins that eventually cost her title.

Nothing worked for her, during her preparation for a rematch, she constantly publicizes that she will take back her belt from Namajunas, as she is the real owner of it.

Thug Rose will give Joanna a second chance to avenge the first defeat of her pro career at UFC 223:

“I think that I took [that intimidation] away from [Jedrzejczyk] the minute she knew about me, even before the fight,” Namajunas told FloCombat. “I think she’s been psyching herself out just by the presence of myself, ever since I’ve been on the scene. I’ve just been freaking her out ever since I’ve been around. I don’t think that’s going to change with this fight.

“We’re constantly improving my game—my reactions, my reflexes, physically, and mentally. It seems like everything is perfect right now for me to be a dominant champion.”

Rose Namajunas said, she is not nervous a bit, the best way to overcome your stress is to punch someone in the face, and this is what I plan to do it again in the rematch.

“I think it’s important for all the losses I’ve had, I’ve always focused on what I could do better the next time,” Namajunas said. “It wasn’t [ever] about the other person. It’s the same thing with this fight. Whatever was going on with her, I can’t control that. All I can control is myself and make sure I’m the best version of myself just like last time—and I won, in dominant fashion.

“All the losses I’ve had, I’ve gained way more from it when I take full responsibility for what happened. So for me, it’s taught me to make sure that I’m doing everything that I can and it’s not going to be any different this time.”

Namajunas is very confident that she will once again finish Joanna.

“I don’t know what’s going to happen,” Namajunas said. “All I know is I’m going to punch her in the face, take her back, and choke her out.”

Do you think Rose Namajunas will retain her title at UFC 223? 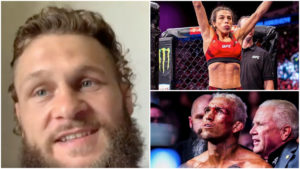 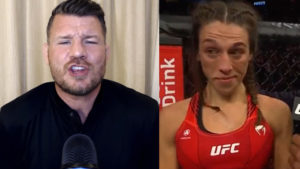 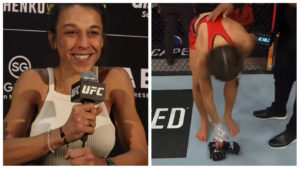 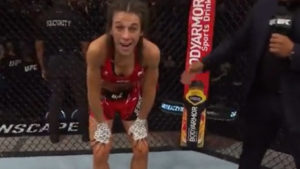 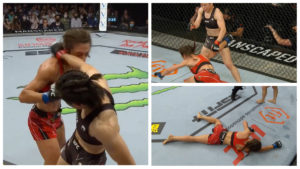