Pic: Rory MacDonald doubles down on calling Floyd vs. Tenshin a fake fight

Eddie Bravo must be so proud right now. Props to Rory MacDonald for saying something we all weren’t really thinking.

All the signs lead to it.

Also, all signs lead people to being dumb AF. For the sake of argument and because we repsect the Canadian Psychopath, we’ll listen to the argument. We love conspiracy theories and we want to hear what Rory MacDonald has to say.

Alright, Rory what do you got? 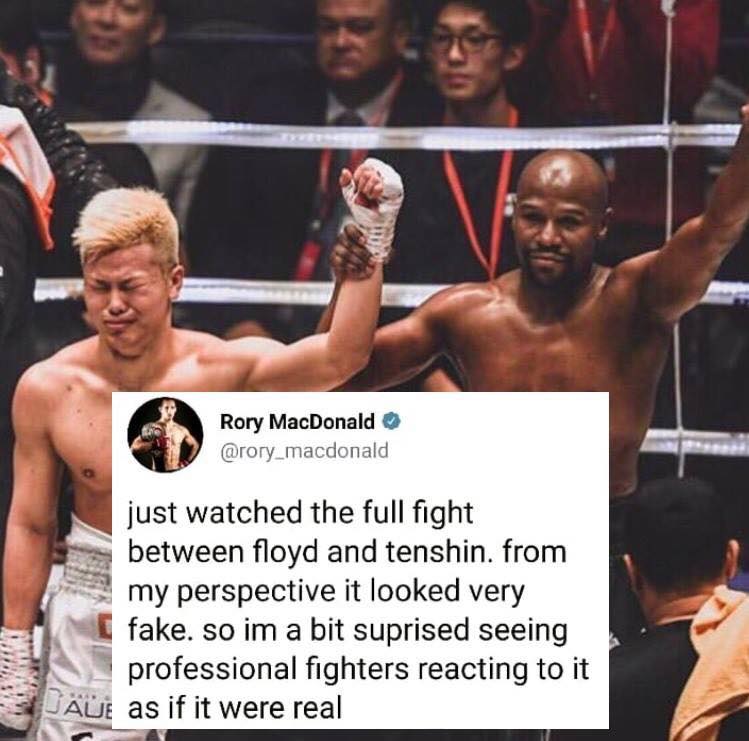 All Rory has is ‘because Japan’. LOL.

A big thing people calling Floyd Mayweather versus Tenshin Nasukawa fake/fixed are missing is the fact that damage adds up. Floyd’s punches that rocked Tenshin earlier in the fight, messed him up for the remainder of the fight.

Who knew getting punched in the back of the head or on your temple will give you wobbly legs?

What’s the science behind it though? Rory MacDonald wants answers and now so do we.

Who will be the brave MMA fan who lets Money May punch them in the head, all in the name of conspiracy theories? The MMA community demands truth, justice and answers to Rizin’s hilarious idea of putting their best fighter in a boxing match with a 50-0 pro.

H/T to our True Detective @AcidHaze for the second screenshot.

Update: Rory will not go quietly into the night.

so ignorant to say that

Jon Jones: 'I Want To Fight 3 Times This Year And Leave Zero Doubt Of My Dominance As A Champion'
Read Next Post →
Click here to cancel reply.