Alright, here’s what just happened. Ronda Rousey was roaming the land of Skyrim for the entire weekend and located a Dragon Shout that has the magical ability to completely destroy Cris Cyborg’s self-esteem. Ronda Rousey has learned every word to her shout, and now that she’s unleashed it just hours ago — the world of MMA will never be the same. We just witnessed perhaps the most lethal verbal dagger to ever be tossed around in the history of mixed martial arts — and it all happened on Twitter!

This morning, Cris Cyborg posted the following picture of Gina Carano on Twitter with the words ‘Next victim… Ronda!!! No mercy!!!.’ 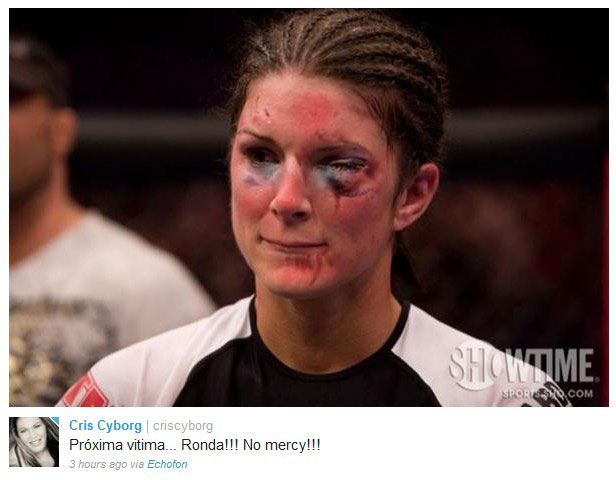 The photo was captured by Esther Lin just after Carano’s August 2009 title bout against Cris Cyborg. Of course one would naturally have to assume that since Cris Cyborg was busted for steroids in her most recent fight (which came with a one-year suspension and a hefty fine), that perhaps all of her fights including her bout with Gina Carano could be under the influence of performance enhancing drugs. Ronda Rousey saw Cyborg’s tweet, and retorted with this gem that will be inscribed and placed on a shelf in the Hall of Trash Talk.

We’re looking at the female incarnation of a circa 2010 Chael Sonnen. Let’s hope she also has a Hispanic doppelganger hiding somewhere out there.

You can tell Mark Munoz loves beating up Chael in UFC Undisputed 3
Read Next Post →
Click here to cancel reply.