Luke Rockhold spoke with the media and revealed a list of sexy, enticing opponents that he would like to face when he returns to the UFC.

Luke Rockhold is planning on making a comeback to the UFC. However, he doesn’t want easy fights. In the words of Rockhold, he’s looking to return to a “sexy” fight offer and has both Marvin Vettori and Darren Till set in his crosshairs.

Rockhold’s last two UFC showings haven’t been his proudest moments inside of the octagon. During his last appearance dating back to 2019, Rockhold was viciously KO’d by the hands of Jan Błachowicz. One fight beforehand, Rockhold was also on the wrong side of a viral knockout via Yoel Romero at UFC 221.

Speaking on Submission Radio, Rockhold announced that he would like to return to the UFC after a nearly two-year layoff. And, he has the opponents in mind in which he would like to slug it out against.

“They’ve (the UFC)  been reaching out, talking, just keeping tabs on my situation and letting me know that they’re interested, as am I. When the time’s right, when something really kind of appeals to me, it’s sexy,” said Luke Rockhold. I want to come back for something that gets me excited, and I want to come back when I’m ready when my body’s ready. And I think early, late summer would be ideal. It’s just matching up with the right person and the right thing that’s going to put me to where I want. I’m not looking to just play around.”

“I wanna go straight to the gut of this division and most likely 185. Not ruling out 205, but I really just gotta push my body to get in shape and see where it wants to go. Right now, I’m light. I’m like 205-208 (lbs) right now, and I think that legitimately it’s going to be looking like I’m going back to middleweight. But we will see. If something pops up, you never know. If a fight falls apart, like many injuries do and COVID and everything that happens, I could be ready sooner than later.”

“I think Chris Weidman, he’s not what he used to be,” Rockhold said in regards to a trilogy fight. “And if he were to somehow change it around in this fight with Uriah Hall and do something, maybe? But right now, these other two fights are definitely more in my viewpoint. This Marvin Vettori kid is doing pretty well for himself, and Darren Till’s done a couple of things here. So, I like those fights.”

Both Vettori and Till have shown that their goal is climbing the rankings and securing a title shot. Perhaps a marquee matchup against Rockhold would be “sexy” enough to make it happen. 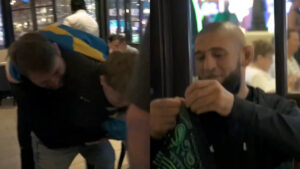 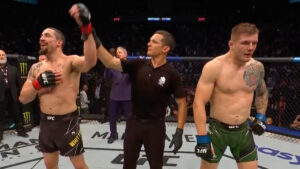 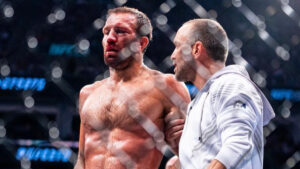