Fight Rock Festival is back! RIZIN returns to Toyko and the Saitama Super Arena on July 30th with the kind of spectacle that only RIZIN can bring to the table. An 11 fight line up in weight classes ranging from Atomweight to Heavyweight, the event truly offers something for every combat sports fan.

The card is headlined by the second RIZIN appearance of Kyoji Horiguchi in the opening round of their 16 man Bantamweight tournament. The Guchi has drawn a relatively easy first round opponent in Hideo Tokoro (34–29–2). Tokoro has jobbed for Japanese promotions for almost two decades, but at 39 years of age “The Magician of the Ring” is 2-1 with RIZIN and seems to be settling into a place with the promotion. While Koriguchi will likely end this fight brutally, Tokoro could continue on with the promotion and gain a lot from a gritty performance. A great showcase for the promotion’s biggest lighter weight star.

In the co-main event, we have a heavyweight class of nations with Iranian Olympic wrestler Amir Aliakbari facing off against America’s Tyler King (12-5). King is most well known for a submission victory on the undercard of Bellator 163: McGeary vs. Davis. I think that sums it up quite nicely. Listen, RIZIN is gonna RIZIN. So if that means they are going to set up squash matches for their giant scary Iranian Heavyweight. That’s just how these things will go. Let’s just settle in for the blood sacrifice this is and stop pretending we don’t want it.

Apparently though, no one told Amir that he’s gonna stream roll King. Because he felt the needs to get all handsy at the weigh-in. Check out the scuffle below.

This spectacle of Japanese MMA doesn’t end there. We have a pair of women’s fights in an unofficial tournament for the right to get gorged by Gabi Garcia.

Garcia herself is facing off against a debuting Russian Heavyweight Oksana Gagloeva. Yeah, so good luck with that Gagloeva. If you are thinking, “Hey, didn’t Gabi Garcia just fight like three weeks ago?” Yeah, you’re right. Of course she did. She soccer kicked some tiny girl in the head. But this being Japan, and Gabi being the world’s most frightening woman, and after taking literally no damage, seems like no one is complaining. And good. I want to see Gabi crushing chicks. At least in RIZIN they won’t call it a “disqualification” just because she punted some girl’s head. That’s what I came to see.

How much is Gabi’s fight a forgone conclusion? The trailer for next fight between King Reina and Lei’D Tapa is all about who will fight Gabi next.

The rise of King Reina since the last RIZIN event has been just a joy to watch. No one in MMA right now has a more bizarrely endearing gimmick than Reina Miura. The crowned teddy bear that she takes every where with her, the ubiquitous Chupa Chup lollipops. It’s just fantastic. Add that to the fact that she spoiled RIZIN’s plans to have Jazzy Gabert fight Gabi Garcia and that she can actually fight? Jesus, what a fun prospect. Again this fight, she’s fighting a much larger opponent in professional wrestler Lei’D Tapa. Tapa had previously been pounded into oblivion by Gabi Garcia. So, all signs of RIZIN matchmaking point to King Reina reigning supreme, setting up a perfect showdown between Gabi Garcia and our undersized King Reina.

Plenty of other great action all over the card. Japanese firecracker Tenshin Nasukawa faces off  agaisnt Kizaemon Saiga in a bizarre kickboxing/MMA hybrid match. Tenshin has put on a show in each of the last three RIZIN events getting a spectacular finish each time. He truly is a great homegrown star in the making for RIZIN. Sengoku and DREAM champion Satoru Kitaoka returns at 37 years old after his upset win over Daron Cruickshank. 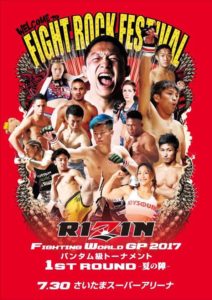 Two other matches in the opening round of the Bantamweight tournament feature Deep veteran Takafumi Otsuka taking on UFC vet Anthony Birchak who is rebounding off his debut loss to Tatsuya Kawajiri at the last RIZIN event. Also, Keita Ishibashi takes on German fighter Khalid Taha to round out the Bantamweight tournament opening round. Also, be on the look out for American Atomweight and Batman nemesis Cassie Robb who is fighting Miyuu Yamamoto.