Rickson Gracie claims he turned down $5,000,000 to fight Sakuraba 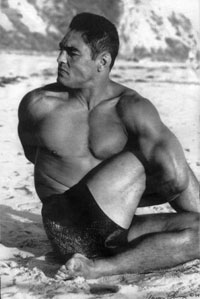 A few months ago we tried to come up with a list of the top ten meta-physical and temporal anomalies of MMA. The title is admittedly ridiculous and it yielded only a handful of vague stories told by people that were most likely under the influence of a number of illegal drugs. However, the one story that seemed to be more legit than most was the accusation that Rickson Gracie had a visible aura around him and some fighters actually turned down opportunities to fight Rickson because of it. A few fighters claimed that Rickson’s aura gave him an unfair advantage and thus enabled him to amass an omnipotent record of 400-0.

Helio Gracie publicly disputed Rickson’s 400-0 record claiming most of Rickson’s wins were obtained in practice bouts and that if he tabulated his wins like Rickson did, he would have over a thousand.

Rickson left the MMA world in 2000 after snatching an ‘official’ record of 11-0. After his retirement, he stated that he would not come back to MMA, despite having a seven-figure payday thrown in his face.

In an interview with Gracie Magazine, Rickson Gracie claimed that a promotion (most likely Pride FC) offered him five million dollars to fight Sakuraba, an offer that he turned down.

“That fight would have been the biggest payout of all times. They offered me five million dollars, it would have put me on easy street. He beat a number of Gracies, and it would have been a good fight for me, perhaps the best fight. He really was a thorn in the side of all the Gracies.”

At the EA Sports MMA launch party, Kron Gracie told me why Rickson Gracie wasn’t a playable character in the game. Of course, by the end of the night I completely forgot due to something called an ‘open bar’. I believe it was something to the extent of he didn’t want anyone to defeat him, in the real world or a digital universe. [Source]

For more MMA News, Rumors and Updates follow the Red Monster on Facebook, Twitter, YouTube and Instagram
FacebookTwitterFlipboardRedditWhatsAppPinterestLinkedIn
Sotiropoulos vs. Aoki is so perfect of a fight that it already happened and we have the video
← Read Last Post
So now that we have proof that the first round of Harris vs. Falcao was stopped early, what happens next?
Read Next Post →
Click here to cancel reply.