Report: Daniel Cormier the P4P Greatest of All Time

Welcome back Middle Easy-ians, to another Adventure in the MMA Multiverse.

In all the infinite universes, it’s easy to get lost in bizarre worlds full of aliens, time travelers, and Cyborgs. But sometimes it’s the universes closest to us that offer the most intrigue.  What would our world look like if it where missing one key event?  One key person?  How many lives change because a person isn’t there to support them… or to rival them?

The eyes of the sporting world fall on Buffalo, NY this weekend, as the greatest pound for pound fighter in the history of MMA defends his light heavyweight championship at the KeyBank Arena. Daniel Cormier, the undefeated, original two weight champion, faces Anthony “Rumble” Johnson in a highly anticipated rematch of their 2015 classic fight. The undefeated Cormier has reached a newfound level of fame since their last match up, and this fight has garner much more attention than there first match up. After replacing an injured Fabricio Werdum against then champ, Stipe Miocic, Cormier submitted Miocic in the 4th round to become the first fighter to simultaneously hold the title in both heavyweight and light heavyweight divisions.  Since then, DC has been clearing contenders out of both weightclasses.

Now after destroying the heavyweight divisions best, he makes a triumphant return to light heavyweight to fight the only man to ever knock him down. And this time, the entire world is looking toward him continuing his undefeated championship run. Cormier is an understandably favored by at -300 to win, with many betting establishments offer much slimmer odds.  Fans are beginning to wonder if there are truly any challenges left for the UFC’s biggest star? At 205, all contenders to his belt have been beaten. Gustafsson and Johnson both fell, and while there was some interest in a rematch with Gustafsson, subsequent loses by the Swede have taken the excitement out of that rematch. In the heavyweight division, Werdum, Miocic, and Overeem have all fallen victim to DC. Only one heavyweight match up is left that interests the public, and unfortunately it is a fight Cormier will never take. 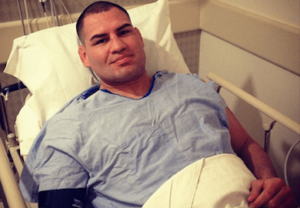 The injury-beset Cain Velasquez, who was forced to give up his title belt after pulling out of consecutive defenses, unwittingly opening the door to DC’s stardom, is the only person the public seems to want to see challenge their beloved hero Cormier. He is also Cormier’s training partner and friend. But in divisions so thoroughly devoid of challengers, the idea of seeing their legendary sparring sessions out in the public eye only builds. The emotion turmoil of being forced to fight your good friend only seems to whet the public’s appetite for this fight even more. Trainer Javier Mendez has consistently resisted answering questions about a potential match up, but recent reports had surfaced of a rift between him and Velasquez after his most recent back injury. And these reports just happen to correspond with reports of Cain training at Alliance Training Center in San Diego. So far though, both fighters have been incredible quick to dismiss a future match up.

So as the world champion passes his 38th birthday, we all celebrate an epic fight here in Buffalo, and another showcase for the world’s greatest undefeated champion. But not without some apprehension.  Could this be the last fight for MMA’s titular champion?  How will the sport’s undefeated hero leaving hurt MMA?  How will Cormier’s career be remembered? Clearly as the greatest fighter of all time, but as one that was never truly tested? Without a Joe Frazier, without a Roberto Duran, without a Ridd**k Bowe, does that tarnish his place in MMA history?  Would he have been even more, if there had been a fighter able to challenge this once in a lifetime talent?  It seems we will never know.

Yesterday, the Chargers traded Jon Jones, DE to the Arizona Cardinals for a sixth round draft pick and a conditional seventh rounder in the 2018 draft. The Chargers will be forced to adsorb $22 million of the $48 million remaining on his contract. Chargers were lucky to get any value for Jones after his second arrest for driving under the influence. Jones finished the 2016 season serving a four game suspension and will only be eligible to play for the Cardinals in week three, contingent on his ability to pass a team physical and complete the league’s substance abuse program. It marks an auspicious end to the Chargers first round pick just four years ago.