Replay: Did Claudia Gadelha land a soccer kick in the UFC or is Cortney Casey a very good actress?

Soccer kicks! Long live the alternate universal timeline where the UFC allowed soccer into their rule set in the early 2000s. Imagine an UFC past where Anderson Silva, Chuck Liddell and BJ Penn were soccer KO-ing fools inside the Octagon. Claudia Gadelha wants this rule and her passion for soccer kicking females in the face peaked out at UFC Fight Night São Paulo.

During a scramble between Gadelha and her opponent Cortney Casey, the Brazilian launched a soccer kick in the general direction of the American’s skull. In the moment, the collective online reaction was split between “oh shit that was awesome” and “oh shit she’s going to lose a point for that”. Checking the action in real time, it does look like Claudia Gadelha beheaded a downed Casey.

Then you look at the replay and it gets a lot fuzzier. Check out Casey’s initial reaction to the soccer kick attempt then watch her hair get a little messy from Gadelha’s kick. Cort? Court? CC? Miss Cast Iron Casey, come on now! 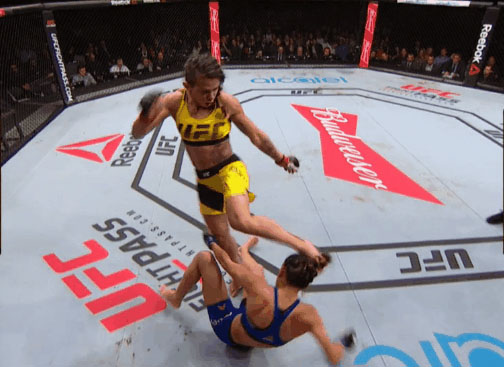 Beef Alert: 4th fight? Rampage Jackson and Wanderlei Silva are feuding about who had the better KO
Read Next Post →
Click here to cancel reply.