Holloway was booked to face Volkanovski in a trilogy fight for the featherweight title at UFC 272 only to pull out after aggravating an injury.

A number of fighters have put their name in the hat to face Alexander Volkanovski next.

Max Holloway was scheduled to face Volkanovski in a trilogy fight for the featherweight title in the UFC 272 headliner taking place March 5 in Las Vegas.

However, Holloway would have to pull out soon after following an aggravation of an injury which forced him to withdraw from the fight.

That put a damper in the UFC’s plans for their main event. The good news, however, is there is still just under two months to go for UFC 272 which means an alternative could step in to fight Volkanovski.

And there is certainly no shortage of suitors.

Former double champion Henry Cejudo — who has been calling for a fight with Volkanovski ever since his retirement in 2020 — was quick to step up.

The streaking Josh Emmett was also waiting for a contract.

“Send me the contract!”

The champion, however, will likely have a big say in who he wants to face and as far as he’s concerned, he’s interested in facing The Korean Zombie next.

@KoreanZombieMMA Let’s do this!! #UFC272

That wasn’t taken so well by some other featherweight contenders such as Giga Chikadze who could only laugh at Volkanovski’s tweet which promoted a response from the champion.

“All respect bro but your fighting for rank #5 next week….See you soon!!👊”

Yair Rodriguez was much more aggressive, however.

“Do I really need to raise my hand @danawhite? Heal up quick champ @blessedmma. @alexvolkanovski I had respect for you before, but now, f*ck you! You little b*tch you know I’m next.”

“Maaaaaate calm down 😂 You have fought once in over 2 years and are coming off a loss. If zombie doesn’t happen you might get lucky.”

You have fought once in over 2 years and are coming off a loss. If zombie doesn’t happen you might get lucky.

Unfortunately for all of them, it looks like Zombie will be the one who gets the fight for now.

“Chan Sung Jung is currently the frontrunner, by a margin, to replace Holloway versus Alex Volkanovski, per sources.”

Chan Sung Jung is currently the frontrunner, by a margin, to replace Holloway versus Alex Volkanovski, per sources.

What do you think of that potential matchup? 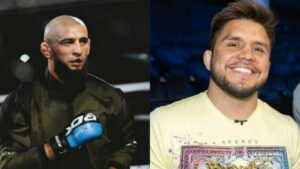