Posted on Last updated: September 7, 2012 By: Author Team ME

Renzo Gracie earned his way onto the unofficial frate trane list in my mind during the wee hours of the morning today. While I was wiping the sleep from my eyes and groggily pouring coffee grounds into the filter basket of my coffee maker-he was busy on the streets of NYC fending off some wanna be thugs and tweeting about it–at the same damn time. That’s about 472 times more hardcore than anything the rapper Future has ever claimed to do at the same damn time.

Apparently Renzo was taking a little night time stroll down the street, when his Gracie spidey senses began tingling and he noticed two thugs scoping him out and following him. Renzo knew these walking piles of excrement were up to no good and rather than feeling nervous or panicked or intimidated-Renzo Gracie began smiling and seemed to almost be relishing the thought of the confrontation that was about to ensue.

Just as Renzo suspected, the two confronted him in an attempt to mug him-but they sure picked the wrong guy to eff with. Renzo Gracie doesn’t get victimized, you foolish criminals. Renzo was able to knock out one of the thugs and as he did the other one ran away. Renzo waited around because he knew eventually the other mugger would come back to the scene of the attempted crime to check on his partner. The whole time this is going down, Renzo is tweeting the play by play of the events and even taking pics to capture the moment.

When the other thug finally gets back, Renzo tweets that he  ‘raccooned’ the guys eyes, choked him out three times and then whispered to him as he came to “that’s what death feels like…don’t do that again.” If that doesn’t say hardcore badass frate trane, I don’t know what does. Here’s the play by play tweets and the pics Renzo took during the attempted mugging: 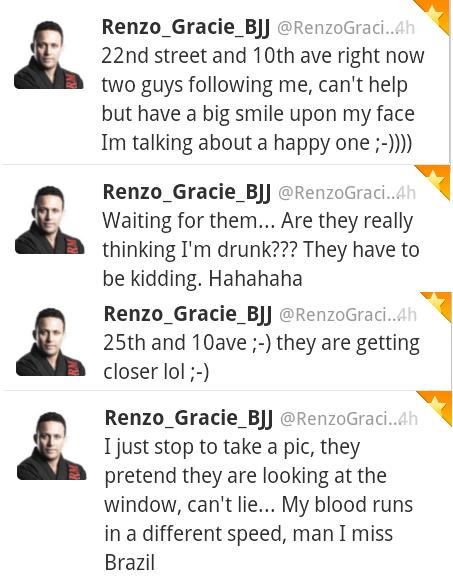 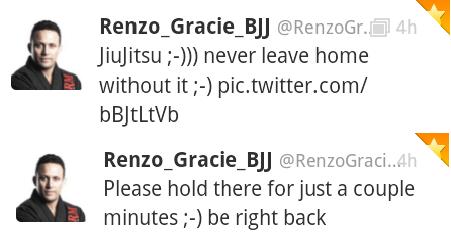 Renzo actually even apologized to his twitter followers at the end of the ordeal for not being able to take a picture of the secod guy as he ran away. That ‘G’ in the name ‘Gracie’ stands for gangster and Renzo is definitely an OG-Original Gangster.  [Source]

Mike Swick talks about his epic comeback to the UFC and his upcoming fight against Matt Brown
← Read Last Post
A Lesson in Street MMA: Conversations and debates from open guard
Read Next Post →
Click here to cancel reply.