My entire adult life can be expressed through a long line of very unwise MMA bets, most of them under the influence of stupidity. Leave it to me to drop my entire month’s rent on Frank Mir not only defeating Brock Lesnar at UFC 100, but knocking him out in the second round. Luckily, my landlord at the time was an avid MMA fan so he understood my irresponsibility along with my reactionary nature to place cash on a fighter because ‘they have glow-in-the-dark walk out shirts.’ Las Vegas is a place to lose money, and if someone proclaims they’ve left Vegas with a positive bank account — don’t believe a word they say for the rest of their life. You may have lost hundreds betting on MMA throughout the years, but at least you didn’t drop $7,000 on a fight that Dana White proclaimed was one of the worst one-sided beat downs in UFC history.

On a now-deleted thread on Sherdog, someone claimed they bet $7,000 on a guy named ‘Meyhem.’ When questioned on the validity of the bet, he provided this betting ticket directly from Las Vegas. Well buddy, some bookie just placed a down payment on a new Mercedes Benz SL63 AMG and you’re left with an image that we’ve published on MiddleEasy. Congrats bud, in the end you still won. Props to Eddy C. on the find. 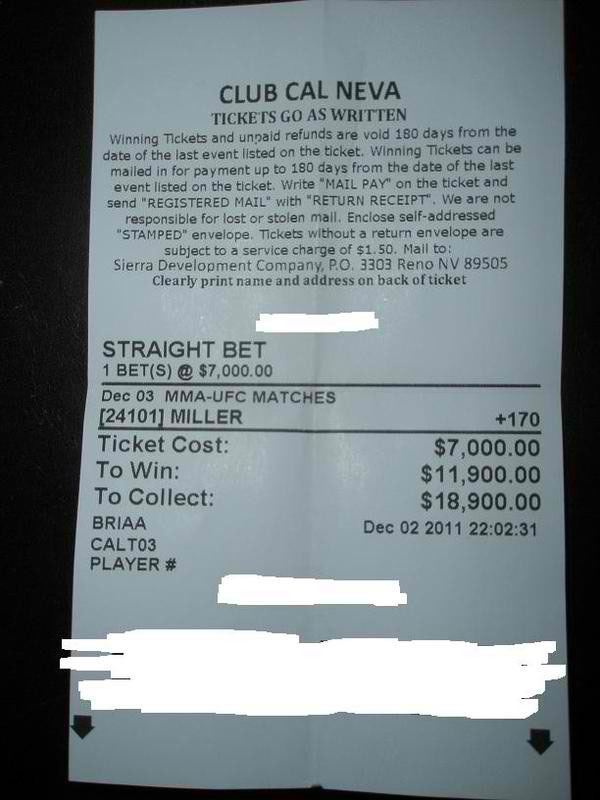 Sorry Steven Seagal, but this guy has the best front kick tutorial ever
← Read Last Post