Rumor: Rematch Still Not Official For UFC 200 But Frankie Edgar’s Manager Sure Is Pissed For Some Reason

This whole rematch talk between Conor McGregor and Nate Diaz at UFC 200 has resulted in a crazy debate ever since it started. Some seem excited about the idea of Ninja Gaiden 2: Multi-Million Dollar Vengeance, while others think McGregor is holding an entire division hostage even if he’s only held the title for three months. No matter how you feel, it seems like it gets closer and closer every day.

Just earlier today we shared McGregor’s Instagram post on our Twitter. It included a statement that stands as a hat tip to Diaz’s Stockton Slap boxing but also gave a foreboding prophecy.

That could mean anything if this post stood alone by itself. However, just after that Frankie Edgar’s manager Ali Abdelaziz took to Instagram as well. Known to talk his fair share of shit from behind Edgar’s Twitter, this time it is in his own words. …And he is pissed.

So, it looks like Diaz v.s. McGregor II is closer than ever but if not it certainly isn’t a fight with Edgar. 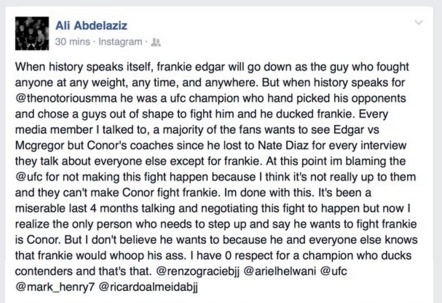 Video: Tyler Freeland Is The Baddest Little Man On The Planet And He Just Signed With Bellator
Read Next Post →
Click here to cancel reply.