Read the Nate Diaz tweet that will get him fined and suspended, or fired by Dana White

Look, we all feel bad for Pat Healy. The guy was shafted a title fight against Gilbert Melendez in Strikeforce due to a last-minute injury from the champion. Healy was scooped up by UFC in ZUFFA’s acquisition of Strikeforce and landed a very tough fight against Jim Miller, a guy who ironically was finished by only one person in his career, Nate Diaz. After a burly brawl at UFC 159, Healy emerged victorious and grabbed a $130,000 bonus solely due to his impressive performance. He then gets busted for marijuana and loses all of it, including the fight which was turned to a no-contest.

Despite how much you sympathize for Pat Healy, one should never use the ‘f’ word to describe Bryan Carraway for receiving Pat Healy’s bonus. Quite frankly no one should use a word that’s rooted in prejudice to describe someone. Call Bryan Caraway a douchebag. Call him a NARC. Call him an raging a-hole. Call him a [expletive]tard. Call him an [expletive]clown. Heck, call him Bryan Tate — one can be offensive, just don’t settle for ignorance.

MMAJunkie’s John Morgan just got word that Nate Diaz’s recent tweet about Bryan Caraway could result in Nate being ‘fined and suspended or cut.’ 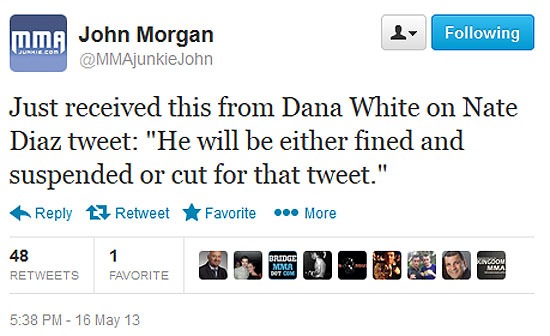 Check out Nate Diaz’s actual tweet after the jump. Bummer. We thought Nate Diaz’s verbal arsenal was more diverse than this. 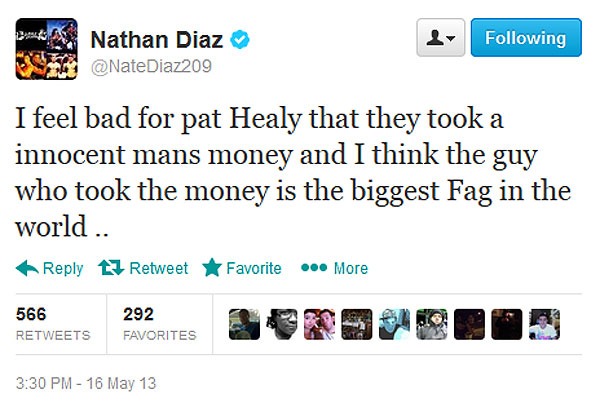 Ken Shamrock says he's the greatest fighter in MMA history, and he has a point...
← Read Last Post

Freddie Roach says he and GSP have already figured out a way to nullify Johny Hendricks' gameplan
Read Next Post →
Click here to cancel reply.