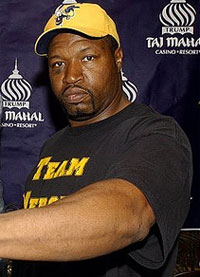 With the flood of jackassery surrounding all that is ‘James Toney’, people forget that ‘Merciless’ Ray Mercer already transitioned into MMA from boxing and demonstrated the power behind a single well-placed punch from a seasoned heavyweight boxer. On June 13th of last year, Tim Sylvia expected to dance the night away at some rawesome afterparty in Birmingham, Alabama immediately after his fight with Ray Mercer, but instead he fell asleep 9 seconds into the first round and woke up with a concussion instead of a hangover (which is really the same feeling). Ray Mercer shocked a lot of people that night by reminding MMA fans that all fights start on their feet. When Silvia learned that Mercer’s fists earned him an Olympic Gold Medal in 1988, his strategy should probably have included keeping his chin well-protected until he found a way to get the fight to the ground. It’s a bummer that he underestimated Mercer’s ability to knock people out. If Tim knew how to use Youtube as well most teenagers, he probably could have come up with a better game plan for that fight. Or maybe not. I don’t think anyone will ever know what Tim Sylvia was thinking.

In any case, Ray Mercer is taking his perfect 1-0 record back into the cage against undefeated Ron Sparks (5-0) on April 16th (2 weeks after his 49th birthday) at King of the Cage in Detroit, Michigan. For those of you who don’t know Ron “The Monster” Sparks, he’s about 6′ 5″, weighs roughly 300lbs, and 4 of his 5 wins have come via 1st round KO. Although at face value, this fight has “WTF” written all over it, however both fighters are heavy-handed punchers who prefer not dragging things out and leaving it to the judges. On the other hand, it all sounds about as exciting as the idea of Kimbo vs. Houston Alexander which ended up being the closest thing to olympic short-track racing I’ve ever seen inside the octagon. By that rational, I’m hoping that Apollo Anton Ohno decides to make the next transition to MMA sometime in 2011. [Source]