Rachael Ostovich was hospitalized on Sunday. Her orbital bone was broken after she was brutally beaten by her husband Arnold Berdon.

Rachael Ostovich (4-4 MMA, 1-1 UFC) also filed a restraining order against her husband on November 19th. According to the court documents, the order has been temporarily granted until May 18th, 2019.

Berdon plans to hire a lawyer and defend against the charges in the court of law. The member of his family claims he had been attacked by Ostovich in the first place.

“A very unfortunate incident occurred Sunday night with Rachael Ostovich that ended with her suffering a fractured orbital and other injuries,” Brian Butler-Au said.

“As a result of these injuries, she will not be able to compete in her upcoming bout with Paige VanZant on January 19th.”

“Rachael is now home from the hospital with her family and will be going back for further check-ups on her orbital.”

Butler-Au added, “We would like to thank the UFC for all their support on this matter as well as the fans and media for your concern.”

Rachael issued a statement on Monday too. It was shared on Facebook by her brother Robby Ostovich to her Instagram story. 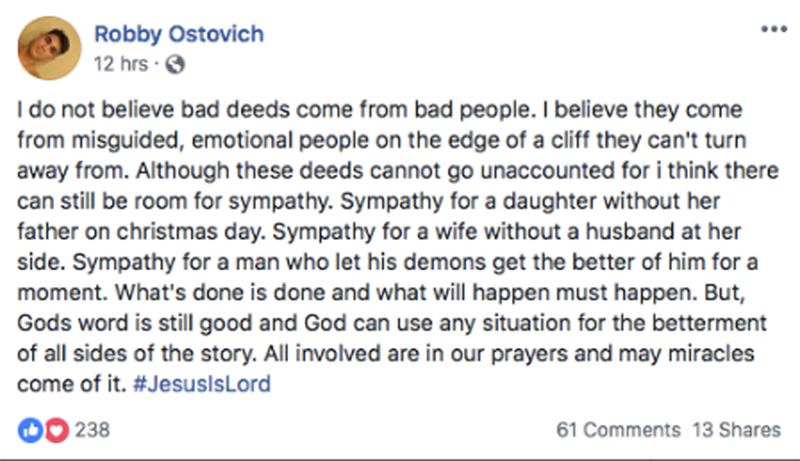 Arnold Berdon (7-2) is an MMA fighter who competes in Men’s Bantamweight division. He is 5 foot 9 inches tall and weighs 135 lbs. Berdon’s last match was at Titan FC 50 – Manfio vs. Outlaw, on June 29, 2018. He defeated Jeremias Hernandez via unanimous decision. He is also known for fights in Destiny MMA and VFC (Victory Fighting Championship). The majority of his victories came via stoppage.

We have recently published a video of Arnold Berdon Vs Tyson Nam fight. Let’s remember, Tyson Nam knocked him out via stunning right hand on August 1, 2015! Bender went down like a wrecking ball after a spectacular counter!

What do you think when will Rachael Ostovich fight again? Will the couple stay together? Stay tuned, this is far from over! Who tells the truth – Ostovich or Berdon?