Siyar Bahadurzada is on the extremely long list of Professional Fighters I Don’t Want to Punch Me*. He may be on a long list, but he’s at least top 3, that’s for sure. How could a welterweight crack the top ten, you ask? Why isn’t the list dominated by heavyweights? Jason, you fool. It’s because it’s a balanced list. You have to pick one fighter from each weight class you don’t want to get punched by so that way it’s fair for everyone. Not that I would be able to take more than one blow to the dome from any fighter at any weight class, but for the sake of this intro, and the list, it’s made in that fashion out of fairness and my obsessive need for balance. Thank God the list isn’t real though, because if it were real, it would be the getting punched version of that scene in Casino where Joe Pesci is digging his own grave in a cornfield.

Siyar the Great opened eyes and mouths in his forty-something second knockout of Paulo Thiago at UFC: Sweden, and although he’s in-between fights, he’s still a hell of a personality that’s kind of gotten lost in the shuffle at 170. Man, the welterweight division is ridiculously deep. Like if Terrence Malick made a move about Terence McKenna. That deep. Here’s a few interesting tweets from Siyar on Saturday night, followed by his newest documentary that’s a must-watch. 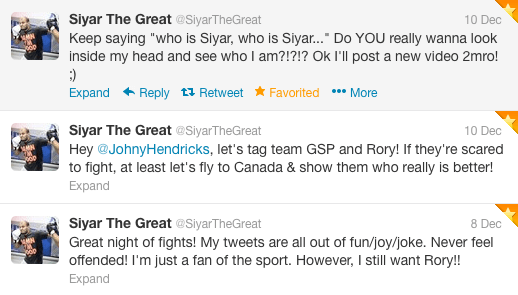 *Professional Fighters I Don’t Want to Kick Me is a separate list.

Ronda Rousey is the 43rd most desirable woman in the world according to AskMen.com
← Read Last Post