Let’s start this off by saying how much of a badass Anthony Bourdain is. This man has a show where he can wax poetically about a noodle dish in Thailand, get hammered and add another tattoo to his body from a skinny dude who could probably go on a win streak in the UFC. On top of being able to tell you the best place to eat from Tokyo to Iceland, Bourdain has regularly narrated UFC specials and trains Jiu-Jitsu. The Igor Gracie blue belt even won his first BJJ competition. He’s got the life you only read about, and he just had a meal and drank Tecate with the Diaz brothers.

You know it must have been good because Nate Diaz is posted back so far he may fall out of his chair. Hell, even Bourdain just admitted to Ariel Helwani that he messed up the quote because he was in a hazy, alcohol fog. What outlandish amount of money could be paid in order to just have the audio to this legendary conversation?

@arielhelwani yeah. It was “I’m not…” Right? Beer related misquote .

I’d give everything I own now just be able to interview Nate or Nick Diaz about this meeting while Gilbert Melendez shot up hand gestures from a safe distance and took blurry pics for Instagram.

Me: What was it like to eat with Bourdain!?

Nate Diaz: We like, ate this dope ass food, er whatever. Spicy, crazy vegetables. …It was cool.

Nick Diaz: Yeah, uh, you know… *looks over shoulder* I don’t really mess with shrimp or anything like that… but uh… you know… It smelled good. My vegan food was straight. That little dude is a food eatin’ motherfucker though, for sure. He, uh, really likes food. So… yeah. That’s dope.

The Food Gods and the MMA Gods have smile upon on today, my friends. While this hypothetical interview between me, Bourdain and the Diaz’s could never happen, it looks like a camera was in fact in the presence of these three men. Could this be on one of Bourdain’s eight damn shows about kickass food and little known places?! I’m sure we all hope so.

Take a look at another picture of this meeting and judge on a scale from skyscraper to Jupiter on how high Nate Diaz is. 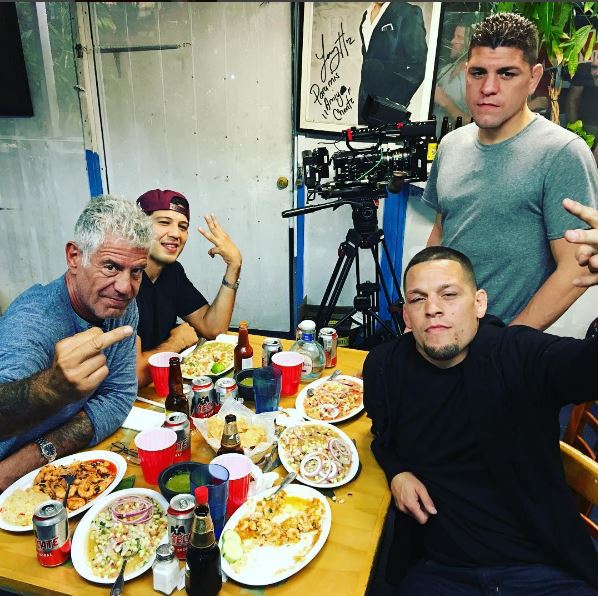 Video: Derek Brunson Knocks Out Uriah Hall in the 1st Round then Does a Little Dance
← Read Last Post

A Lesson in NFL Fan MMA: Fighting Bruce Lee style at a Raiders game gets you uppercut KO'd
Read Next Post →
Click here to cancel reply.