Alright everyone Joe Lauzon is back. The real Joe Lauzon has emerged from the comment sections and he just burned the hell out of UFC featherweight Nik Lentz. Sure, we respectfully disagree with Lauzon’s stance on the evil empire AKA Reebok but this crack back on a random Lentz is just too good.

Underneath his beard and MAGA press on tattoos, Lentz is kind of a huge ass Internet troll. Lentz’s target for the past two years or more has been BJ Penn and The Prodigy’s unsuccessful return to the UFC. Lentz wants that Penn payday and has been trolling the Hall of Famer nonstop in hopes of getting some sort of response.

Well, Lentz finally got a response but it was from Lauzon and it was in defense of his former TUF 5 head coach. Don’t let your jaw drop too hard as Lauzon just rips deep into the inner soul of an unsuspecting Nik Lentz and takes a healthy bloody bite out of him. #Dead 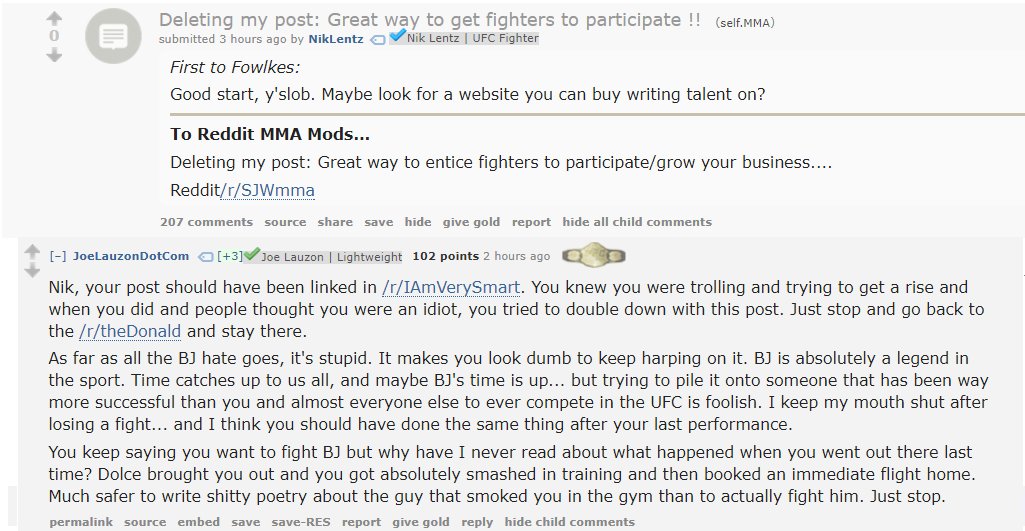 H/T to ace Redditor @KeithGalvin for the cap

Video: Bob Sapp returns to kickboxing, cuts a promo and ends it with a haunting laugh
← Read Last Post