Pic: Featherweight Anthony Pettis is not looking good, kind of sick and we want to feed him

MMA weight cutting sucks. The human body was not built to undergo the car crash that is stripping your body of 15 to 30 pounds of weight in a short amount of time. Former UFC lightweight champion Anthony Pettis has come to a crossroads in his career; in a division where he was once the best world he has suffered three consecutive defeats.

Down on his luck in one loss and thoroughly dominated in the other two, Pettis has decided his best course of action is drop himself into the featherweight division. In the name of competition Pettis is cutting ten extra pounds off his already muscular frame.

Pettis was never considered a huge 155 pounder but in a new picture from a interview this week the Featherweight version of Pettis looks really hungry. Or the 145 pound Pettis looks very sick. Or the smaller, faster, leaner Pettis should think about going back up to 155 pounds if this weight cut doesn’t go his way or he gets beats by Charles Oliveira at UFC on Fox this Saturday night. 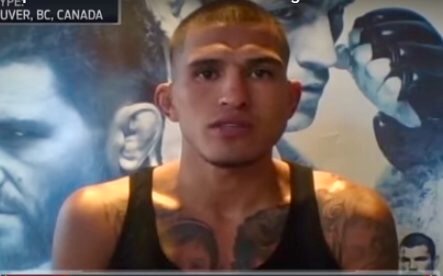 This picture of Carlos Condit inside a Killer Whale warms our violent soul
Read Next Post →
Click here to cancel reply.