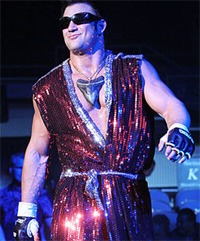 Phil Baroni reminds me of my roommate in college that used to hold freestyle battles with the school cook he named ‘Chefy Poo’. He also told me Hollywood should cast him for the role of Spiderman because Tobey Maguire ‘looked too Polish’. Baroni’s last fight was against Diesel Joe Riggs in which he lost a unanimous decision (before that he was on a three fight winning streak). Apparently that wasn’t enough to impress the guys at Strikeforce and tonight they issued a press release about ‘The New-York Badass’:

The 33-year-old Baroni, a native of Long Island, N.Y, has lost four of his last seven bouts. In his last appearance, a welterweight (170 pounds) matchup with Joe “Diesel” Riggs at St. Louis, Missouri’s Scottrade Center, Baroni sustained a one-sided defeat by way of unanimous judges’ decision.

“We wish Phil the best of luck and hope he can revive his career,” STRIKEFORCE Founder and CEO Scott Coker said Thursday. “If he can, maybe one day, he can return and fight for us.”

Baroni’s most noteworthy fight in STRIKEFORCE was also the first STRIKEFORCE middleweight (185 pounds) MMA championship bout in history on June 22, 2007. Refusing to tap out, Baroni was choked unconscious by four-time world champion Frank Shamrock in the second round (4:00) of action.

Apparently Baroni has verbally agreed to fight with UFC once again. It’s also important to note that Baroni’s last fight, he came out wearing a bathrobe and spent the entire time yelling at a Strikeforce employee who tried to instruct the fighters to stand in front of the camera. As long as we get to see this dude in the cage, the universe is good. [Source]