The PFL (Professional Fighters League) 11 was held on December 31st, 2018, inside Madison Square Garden’s Hulu Theatre, in New York, New York. It aired on NBCSN. Six champions were rewarded with $1 million checks for winning the tournaments in their divisions.

Sean O’Connell (23-10 MMA) defeated the former Titan FC and M-1 Global champion Vinny Magalhaes (28-10 MMA) to win PFL Light Heavyweight title. As soon as the fight was finished, this radio host and PFL broadcaster announced his retirement from MMA. It was a typical striker Vs grappler match.

In the first round, O’Connell was punching his rival like a pro. Despite Magalhaes made to take the fight to the ground at one moment, he couldn’t finish his opponent. Sean O’Connell was surprisingly good on the canvas. “Pezao” threatened with leg submissions, but O’Connell slipped away. The American oddly engaged in grappling situations with his opponent and survived until the end of the round.

Vinny Magalhaes looked seriously gassed in the second round. His takedown attempts were too slow. “Pezao” was unable to trade shots with his rival due to a lack of stamina. O’Connell’s distance was simply world-class, just as his punches.

But everything changed in the third round. “The Real OC” cracked his opponent with a series of dangerous punches. Magalhaes was exhausted, and even looked funny. He repeatedly flopped to his back after unsuccessful takedown attempts. But Sean O’Connell didn’t buy that, and showed him to get up every time. Vinny Magalhaes attempted a desperate armbar at the end of the third round but missed it.

At the break between 3rd and 4th round, Magalhaes informed his coach that he can’t continue the fight because of an injury. The match was stopped, and the referee claimed Sean O’Connell winner via TKO (doctor stoppage).

“There’s no better time to walk away,” O’Connell said during his post-fight interview with Carolyn Pierce. “In front of my friends and family in an iconic arena. I’m moving on. This is the last time you’ll see me competing, but I’m never leaving this sport.”

Here are is the list of all PFL 11 results:

What do you think of Sean O’Connell performance? What a great way to finish an MMA career! 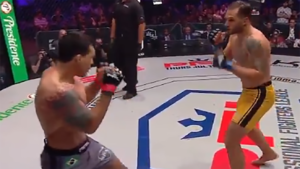 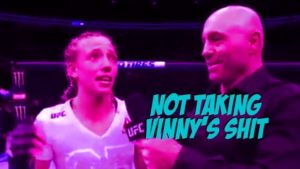 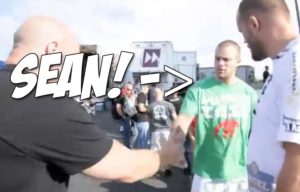