Paulo Costa defeated Uriah Hall via second-round knockout at UFC 226, improving his UFC score to 4-0 and MMA score to impressive 12-0.  But the greatest surfer of all time, Kelly Slater, wrote something provocative on Instagram that really made Paulo Costa angry. (via MMAFighting.com) 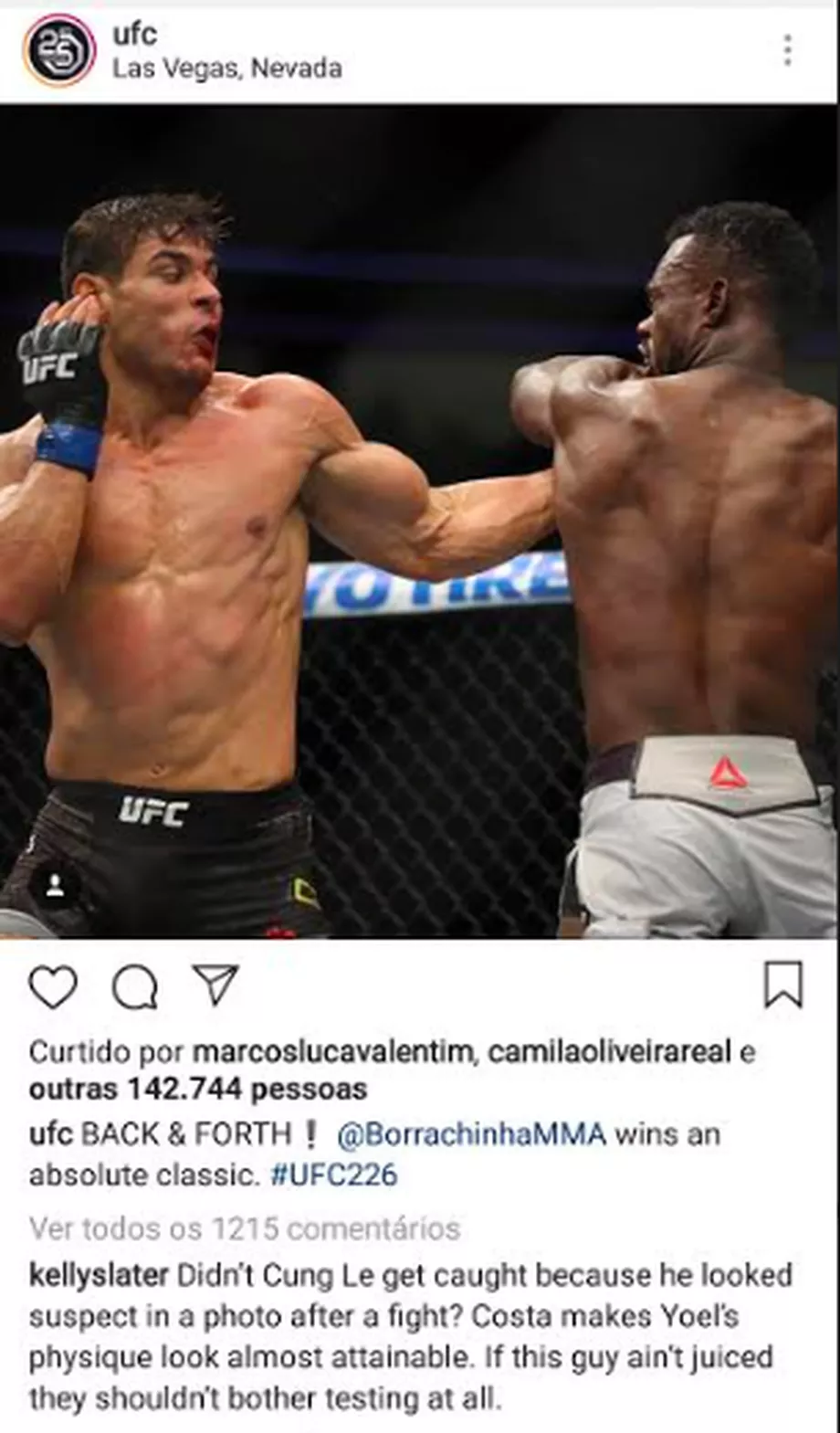 If you check the official USADA website, since his appearance in the UFC back in 2017, Paulo Costa was tested 19 times! What an impressive score! And he has never failed a single test! Costa’s anger is justified, and he even called Kelly Slater stupid.

“Kelly Slater talked too much, said stupid things,” Costa told MMA Fighting. “He doesn’t understand how the anti-doping system works in the UFC, he doesn’t know how USADA works, doesn’t understand the USADA policy of testing any fighter at any moment anywhere in the world, blood, and urine.

”We do random tests all the time, so if someone says a UFC fighter is fighting on the juice, to me that someone is completely ignorant about MMA, UFC, anti-doping and USADA.”

Paulo Costa has been hearing such comments since he made his UFC debut, so Kelly Slater is not the first man who attacked him. It looks like many people simply can’t forgive success and 12 finishes in 12 fights. However, Costa says he does care about comments.

“It does bother me because people talk without knowing,” Costa said. “They judge me because I have a good physique, an excellent condition, and think I got this by cheating instead of hard work, diet, effort and sacrifice. I keep working really hard, so it bothers me because they diminish my work and effort. But I know where my results come from, so my conscience is clear.”

Paulo Costa wanted a fight with the former UFC Middleweight champion Chris Weidman as soon as he won Uriah Hall. Israel Adesanya’s name continues to appear since he called for the Hall-Costa winner after his victory over Brad Tavares. The best Nigerian-born fighter is also a striker, and this might be the kind of war fans want to see. But Costa is extremely sure about his qualities.

“I asked for a fight with Weidman because he’s ranked higher,” Costa said. “Fans might wanna see me fight Adesanya because we’re two exciting fighters. Adesanya is a striker and so am I, and that’s what fans like. We’re both undefeated. If I were a fan I would also like to see that fight, but the best scenario possible is a fight with Weidman. Not because it’s the easier fight, but because it takes me higher.

“I still believe I’m the most powerful striker in my division. Dare I say, even at light heavyweight,” Costa continued, adding that he’s open to moving up to 205 pounds one day in the future. “I’m sure that if I fought Adesanya he would get knocked out, I believe in the first round. Weidman has good chances of being knocked out as well.”

Paulo Costa has finally recovered from a biceps injury. He could fight Uriah Hall earlier this year if the injury didn’t happen. The Eraser hopes for the fight versus Chris Weidman in November. He also believes it might happen at UFC 230, in Madison Square Garden.

“I want to come back, fix the holes,” Costa said, “and work on my wrestling to keep the fight standing and knock Weidman out in November.”

What do you think, who is Costa’s next opponent? Do you really think Paulo Costa has chances versus such a good fighter like Chris Weidman? Or the showdown of strikers would be a better solution for entertainment?