Paul Daley wants to fight everyone 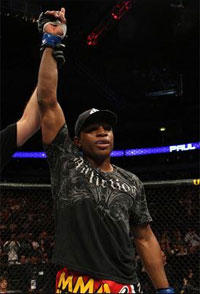 I never realized how many Denny’s restaurants there are in America until I took a road trip through Maryland and Virginia. I’ve only been to Denny’s twice in my life; once was after a collegiate wrestling meet in Rochester, NY. The other was with Roxanne Modafferi after her win over Tara LaRosa in Boston. Both times I ordered a chicken burrito and promptly said I’d never be back but apparently in the South, Denny’s value meals are all the rage. When they aren’t grubbing on ‘Grand Slam’ breakfasts, people down there maintain a strict diet of Mountain Dew and beef jerky. Marlboro Reds are always the corresponding condiment of choice. None of this has anything to do with Paul Daley and his recent expulsion from the UFC, but luckily, he has been finding work throughout the world.

Last week, Semtex picked up a knockout win over Daniel Acacio in Sydney, Australia and is rumored to be looking for as many fights as he can possibly cram into the remainder of 2010. Joining Tecknoviking vs. Trevor Prangley, Sokoudjou vs. Houston Alexander, and Drew McFredries vs. Joey Villasenor, Paul Daley has now agreed to fight at Shark Fights on September 11th against someone named ‘TBA’ who’s from a place called ‘N/A’. We don’t know much about TBA yet other than that he’s not afraid of Semtex and after their fight, he intends on bumping up to heavyweight to fight Herschel Walker in October. Personally, I think TBA is going to drop out of both fights just like he did against Bobby Lashley at Strikeforce: Miami.

With Paul Daley joining the roster, Shark Fights 13 has just declared an arm-wrestling match against ‘War on the Mainland‘ for ‘sleeper card of the year’. It’s unfortunate Shine Fights imploded, that would have made all the sleeper card nominees ante-up for 2011 with a vengeance. [Source]