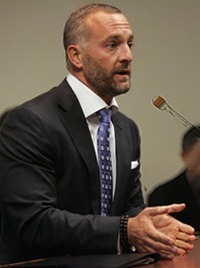 “Fedor wants to use UFC for a fight to be relevant, and then leave and do his own thing. That’s not our business model.”

“We spend more money for marketing than anyone has ever spent on Fedor,” Fertitta said. “If I bring in Fedor, we’ll make him the most recognizable face in MMA, but we also want to recoup on our investment. You wouldn’t sign Tom Brady for one game. So why do I want to sign this guy for one fight?”

Here’s a game. Call Fedor irrelevant and see how many seconds it will take you to get an overhand right to the side of your face. What’s irrelevant is the fact that my functional alcoholic neighbor has 12 kittens that roam around my apartment complex like those kids on Mad Max: Beyond the Thunderdome. Everytime I open my door I want to throw a can of tuna off my balcony just so they will get out the way (and jump off the second floor, just kidding Peta) [Source]

The dude that slayed Kimbo gets in the cage again

Jake Paul Calls Out Conor McGregor and Dillon Danis, Says He Would Knock Them Out