Ortiz was recently elected to the Huntington Beach City Council and his first meeting had a rocky start. 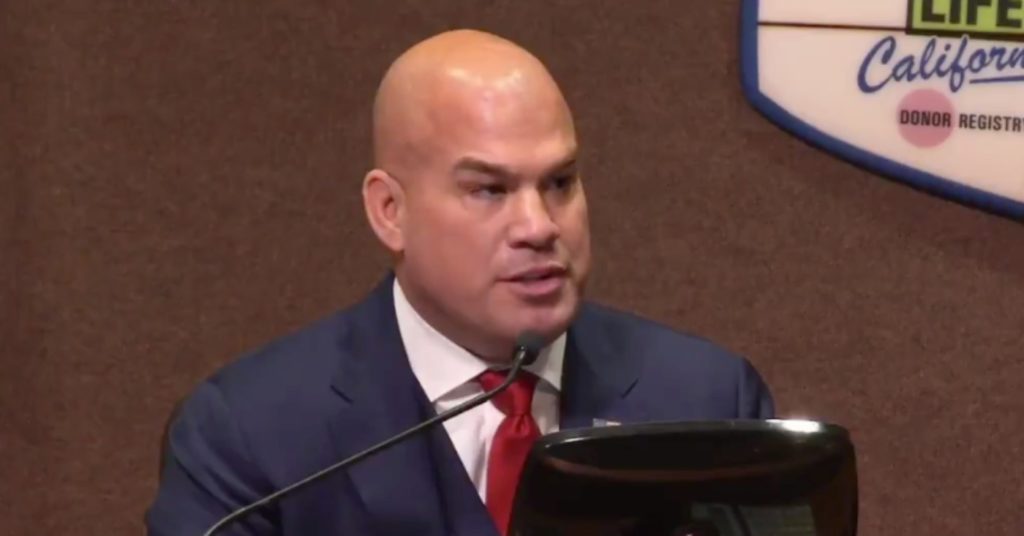 Former UFC light heavyweight champion Tito Ortiz’s life in politics got off to a rocky start.

Ortiz was recently elected into one of three vacancies on the seven-seat nonpartisan Huntington Beach City Council. This week notably marked his first council meeting where he was sworn in for the role.

Ortiz is a Republican conservative who has been a vocal supporter of President Donald Trump in recent years. He is also no stranger to conspiracy theories and letting his opinion be heard about a number of issues such as COVID-19 and the mandatory use of masks.

One such Huntington Beach resident was not impressed with a study Ortiz posted about masks not being effective among other things and called in to say his piece.

“I also think it’s important to inform the people and make sure that you are being a good example,” the resident said. “I do not think it is appropriate, for example, to claim that COVID is a form of population control or to cite a news article claiming that masks don’t work, which is based on a Danish study which says on its first page — and I quote — that it has ‘inconclusive evidence results, missing data, variable adherence, patient-reported findings on home tests, no blinding, and no assessment on whether masks can decrease disease transmission from mask-wearers to others.’ That’s on the first page of a study that an incoming city council member [Ortiz] cited on their Instagram page.

“Most of all, I think it’s important to respect the people who work for us in our city. I don’t think it’s respectful to say that ventilators cause COVID or to imply guilt on the part of our doctors and medical professionals. I also do not think it is respectful to not have the police wearing masks in crowded environments. It doesn’t cost that much to wear a mask and I think it is the bare minimum of respect to wear one when you’re in a large crowd of people downtown and I have not seen that upheld to the largest sense.”

A Huntington Beach resident calls in and roasts Tito. pic.twitter.com/o4FVTvPIGP

Of course, that isn’t like to change Ortiz’s views on the matter.

He was notably not wearing a mask during the meeting and when giving his first speech, the 45-year-old went on to make a plandemic reference.

In his first public comments as Huntington Beach Mayor Pro Tem, Tito thanks the Huntington Beach residents that gave him “an opportunity to speak in front of large groups.” Then he makes a COVID-19 “plandemic” reference. pic.twitter.com/Z3hxjXpbSW

This certainly won’t be the last we’ll see of Ortiz making headlines during his council meetings.

Tony Ferguson Threatens Not to Fight Charles Oliveira at UFC 256 if he Misses Weight
Read Next Post →
Click here to cancel reply.