Brian Ortega spoke to the media about a rematch with Max Holloway or a title fight against Alex Volkanovski after Fight Island 6. 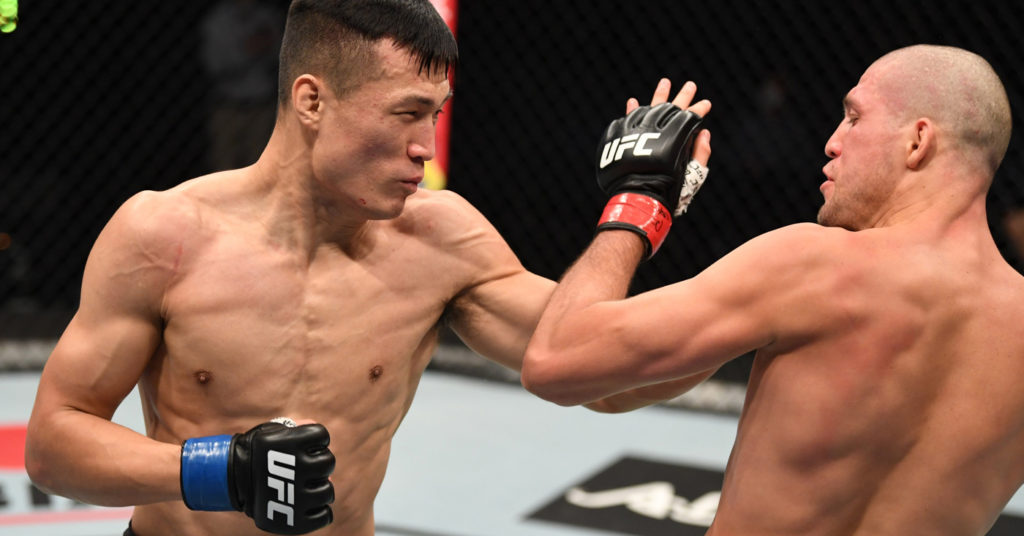 Brian Ortega may have not shocked the world, but he certainly proved his doubters wrong against the Korean Zombie. At UFC Fight Island 6, Ortega displayed a new array of stand up skills, which allowed him to completely dismantle the Zombie. Which, shocked many fans who thought that Brian would have to rely on his superior Brazillian jiu-jitsu skills. After the fight, Ortega fielded a plethora of questions from the media, including inquiries about a Max Holloway rematch, plus a featherweight title fight.

Ortega continued to score with his jab throughout all 5 rounds. He looked sharp, easily finding his range. Faking takedowns by leg grabs was a method that allowed Brian to catch Zombie with an elbow that cuts his eye badly. This was the turning point that took the fight from cruise control to a dominant and powerful victory.

Brian Ortega Speaks to the Media

After, Ortega spoke with the media on Fight Island. It was then that he expressed how he felt about Alexander Volkanovski and Max Holloway, as well as other topics in the sport.

“I watched his (Alex Volkanovski’s) fights – both of his fights with Max,” Ortega said. “Obviously, after that, I had to watch that. Very methodical, very technical with the way he approached everything.”

“I said this in the beginning, in the very, very beginning when the fight was first set up: ‘We will meet again.’ He’s going to stay at the top,” said Ortega about Max Holloway. “He’s not just a guy that’s going to drop right off the bat and just spiral down his career. I’m not a guy that’s going to just fall off like that. Clearly, tonight, I showed the world that’s not me.

Back With a Vengence

One of the best things about winning dominantly is that it creates a lot of different paths for Ortega. And, for anyone unfamiliar with the sport, having options is what’s best for business. The UFC could choose to go in several different directions with Ortega. He could get the Holloway rematch, a title fight, or one of the competitors in a Yair Rodriguez vs Zabit Magomedsharipov.

Whatever route they take, Brian Ortega is back with a vengeance.

Khabib Nurmagomedov Gets Touching Tribute For His Father Ahead Of UFC 254, With Animated Video From BT Sport
Read Next Post →
Click here to cancel reply.