#UFC205 is OFFICIAL!! Kicking off coverage is the Press Conference TODAY @TheGarden! When, how & where to watch ⬇️ https://t.co/wMTA4IvTlq

No questions. No “buts”. No “what ifs”. UFC 205 on November 12th in New York City will be the best card the UFC has ever offered up to the Fight Gods. 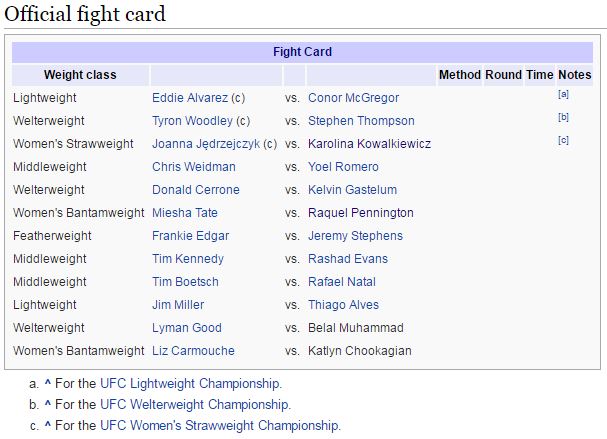 Whatever kind of human sacrifice the UFC needs to throw at the alter of the Fight Gods they must do it, right here, right now, in order to make sure UFC 205 stays intact. At the top of the card Conor McGregor returns for his long anticipated shot of holding two UFC belts at the same time when he takes on lightweight title holder Eddie Alvarez. From BoDog to Dream to Bellator, now to co-headlining the biggest UFC event in history, Eddie Alvarez deserves this massive UFC 205 payday.

The undercard of UFC 205 features not one but two title fights. Tyron Woodley puts his belt on the line for the first time versus striking savant Stephen Thompson then Joanna Jedrzejczyk’s strawweight belt is up for grabs as she takes on fellow striker Karolina Kowalkiewicz. Stacked! Insanely good!

Rumor: Former WWE wrestler Ryback is in negotiations with Bellator for a heavyweight fight
Read Next Post →
Click here to cancel reply.