One FC: The Night of the Event

Posted on Last updated: September 5, 2011 By: Author Team ME

This article is a continuation from ‘One FC: The Day of the Weigh-Ins‘…

Waking up in Singapore, you’re always under the realization that you’re laying in a bed on an island that’s six times smaller than Rhode Island — and Rhode Island isn’t even an island! It was the day of the gargantuan event that we’ve been talking about for months so I knew I needed to do a little pre-celebration by attacking the hotel buffet like it’s Shaolin. Food in Singapore is alright, but it’s dependent on whether or not you know exactly what you’re eating. Otherwise, whatever you ingested will instantly rip open your stomach and make you one with the porcelain god. I had a few hours to kill before One FC began to whisk away the fighters, officials and media to the Singapore Indoor Stadium, so instead of doing the cliche bar run that you probably assumed I would engage in, I worked out for an hour. That’s right. For One FC’s innagural event, they were going to roll out the red carpet so I had to put forth at least some effort to look my best in front of the camera. However, it’s not like anyone of you out there would recognize who I am anyway. It’s the thought that counts. 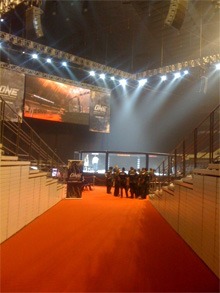 There were two buses that left the hotel. The first of which was purely for officials and staff members of One FC. The other, for the fighters and their corners. I had to choose one, so in order not to jinx any of the fighters on the card, I rode with the officials. Yuji Shimada sat next to me, so I tried to strike a conversation with the former Pride FC referee. It went something along the lines of ‘Dude, people love when you say ‘judge, judge, judge — fight!’.’ That’s all I had for him. My wit dried up when I was in Singapore. It’s entirely too hot out there to recognize basic social cues like ‘Maybe I shouldn’t go into fanboy mode when I have a lanyard around my neck with the words ‘MEDIA’ on the front of it.’ On the ride to the Singapore Indoor Stadium, everyone on the bus had time to soak in the view of downtown Singapore. The place is like the Dubai of Asia. The landscape is filled with innovative architecture and multitudes of very upscale shops to waste a multitude of money on generally useless things. If you wanted a gold plated iPhone 4 with diamond encrusted accents, it’s just a stone’s throw away. Our bus pulled into the venue (which looked a little something like this) and we were all escorted by a crew clad in One FC MMA shirts to various rooms. The judges went to a large room on the right, the officials went to the room adjacent to it, the rest of the One FC staff migrated to the other side of the hall. I was left in front of these wonderful ladies. They were in charge of escorting the red carpet VIP guests to their seats along with showing them where the cageside bar was located. Yes, there was a cage bar located on the side of the cage with complimentary drinks for all VIP guests. The VIP section hosted everyone from Kazuo Misaki to Akihiro Gono and a few other people that I couldn’t recognize, but were getting asked to take pictures wherever they stepped. These fans seemed to know their fight game, and they were infiltrating the floor just to snag a few pictures with their local heroes. Props to them. It must have taken some careful planning to break through the fort that was One FC’s security. Chatri Sityodtong, the head of Evolve MMA, emerged from the crowd and wanted to take me backstage to check out the rest of the team. For those that have some short-term memory deficit, back in April I took an extensive tour of the place and even managed to interview Chatri while we ate Acai berry — a fruit that he personally imports from Brazil just for his fighters. Just before I walked through the door into the locker room, a security guard held his arm out and sternly told me that no media were allowed backstage. Chatri uttered the phrase ‘Don’t worry, he’s with me’ and the security guard’s face transformed into that of absolute acceptance. It’s pretty hard to describe, but needless to say the next time we encountered each other, he gave me a head nod.

I’ve never had the opportunity to go into the fighter’s locker room of any MMA event, so I wasn’t quite sure what the protocols were. You could literally cut the tension in the room with a blunt knife. It’s synonymous to that scene in Gladiator where Russel Crowe is trapped in a holding cell, anxiously waiting to be the next person whisked away to fight some mace-wielding maniac with an iron helmet. Phil Baroni sat quietly in the corner, getting into zen meditative state (or as Nas calls it, a ‘New York State of Mind‘). Josh Thomson and I talked for a while, and unfortunately his foot is still messed up. Aside from talking to the guys at Evolve MMA, being backstage is entirely too tense of a scenario to enjoy. These guys were just minutes away from being locked inside a cage with another guy who’s trained two months just to render them unconscious. I didn’t feel worthy, so I abruptly left and returned to the arena, which at this point was nearly full. 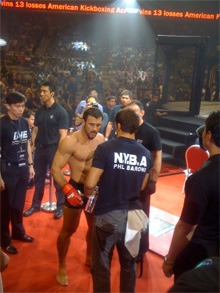 For those that follow MiddleEasy on Twitter, I apologize for the lack of live tweeting throughout the event. For some reason, the media section was located in a separate room in the Singapore Indoor Stadium and unfortunately it was the only area that had internet access. There was no closed-circuit television, so in order to watch the fights and tweet, I had to constantly bounce back from both locations, something I did quite often that evening. One FC also hired guys to walk around the VIP area with trays of hors d’oeuvres, definitely a nice touch to the red carpet area.

The lights were dimmed, the arena filled with heavy thumps of bass and the event was underway with a Pride-like entry of all the fighters on the card. Fireworks were set off, smoke rose from the arena and the crowd went absolutely bananas. I won’t give round-by-round breakdowns of the card since most of you have already seen One FC’s inaugural event by now (or have at least visited their official site to see the results of the card), but I do want to point out a few notable things that I noticed during the event. First of which, Evolve MMA rolls deep. They’re like the Wu-Tang Clan on MMA. The entire camp comes out during each fight to support their fellow teammate and as each Evolve fighter walked out, they stormed the arena. Here’s a picture I took backstage just seconds before the Evolve MMA team entered the arena for Eddie Ng’s fight. Overall, the entire event seemed really organized and the people in charge appeared to know what they were doing, especially for the organization’s first event. I still haven’t had a chance to re-watch the card, but from what many of you told me on Twitter, the production value seemed pretty high.

That’s it from me. Oh, the after-party. Yes it was amazing, and yes that ring girl was there — but that’s all the information you’re getting.

Alistair Overeem talks to us about his UFC negotiations and possibly moving to Hollywood
Read Next Post →
Click here to cancel reply.