ONE FC: Pride of a Nation Set to be a Proving Ground for Phil Baroni and Rodrigo Ribeiro

There are very fighters whose careers have spanned PRIDE, UFC and just about every major promotion in the world and who have done it with style, yet, Phil Baroni is just that fighter. When it comes to wins and losses, with the New York Bad Ass, they are merely subjective concepts, as no matter the loss, he continues to march forward and be the “Best Evah.” The same can be said for his opponent, Rodrigo Ribeiro, an incredibly tough Brazilian Jiu-Jitsu expert based out of Singapore’s Evolve MMA camp. Ribeiro is a well known BJJ teacher and made for a great addition to the Evolve team as well as ONE FC’s Welterweight division. 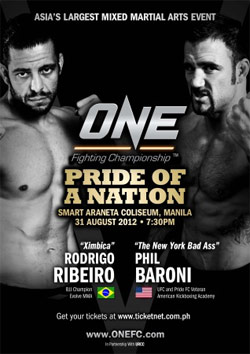 For Phil Baroni, there isn’t a lot left for him to prove in the world of MMA, as he has already been everywhere and fought just about everyone all over the world. Known for his legendary run in PRIDE that involved huge wins over Ikuhisa Minowa, Ryo Chonan and Yuki Kondo, as well as his Strikeforce Middleweight bout with Frank Shamrock and his multiple UFC runs, Phil Baroni has earned his title of the New York Bad Ass. He has not always been known for having the best, most complete training camps, but for this fight is truly doing everything that he can to properly prepare for this fight. He’ll even admit that taking his last fight on short notice without a proper training camp was a huge mistake, but as a fighter it is difficult for him to turn down fights. We’ve been promised that Baroni will be prepared for this bout and that we’ll see an improved Phil Baroni.

his opponent is Evolve MMA’s resident Brazilian Jiu Jitsu expert Rodrigo Ribeiro, a third degree black belt in BJJ and one of the instructors at Evolve. Ribeiro provides an interesting challenge for Baroni, who is best known for his stand up skills, and will have to be very aware of Ribeiro’s legendary ground game. Ribeiro is in a similar spot as Baroni, with an impressive background and a warrior spirit, but a .500 record in MMA, looking to prove himself as a real talent. Ribeiro serves as an excellent teacher in BJJ and MMA, but wants to be known for more than just being a good instructor. His ONE FC debut was a tough loss to Rustem Khabilov at ONE FC: Battle of Heroes.

Both fighters have a lot to prove at ONE FC: Pride of a Nation, both to themselves and to critics across the globe, and expect to look to do just that. For Phil Baroni, the man has never been known to have anything but entertaining fights, so expect him to come out swinging and looking for the knock out against the BJJ expert. For Ribeiro, look for him to try to get the fight on the ground and submit Baroni or simply nullify his game and pound him out. What is clear is that both guys are going to look at this bout as a way to impress the ONE FC brass as well as fans across the world and build a name for themselves in ONE FC.

Take two aspirin, watch this walk-off KO, then call us in the morning
← Read Last Post

FINALLY! The ONE FC: Pride of a Nation weigh-in video is up, so check it out!
Read Next Post →
Click here to cancel reply.