Justin Gaethje will be getting his title shot at lightweight.

Get out of the way, Conor McGregor. You’re not getting the next title shot.

Instead, it will be top contender Justin Gaethje who’s officially next in line for the champ Charles Oliveira. The two will settle their differences at UFC 274 on May 7th, as they battle it out for the lightweight crown.

The matchup was first reported by ESPN’s Brett Okamato, who confirmed with UFC President Dana White.

OLIVEIRA VS. GAETHJE IS ON, per UFC president Dana White. Championship fight will take place May 7, location TBD. What a fight. And Still? And New? pic.twitter.com/MJv2mMaqtK

Charles Oliveira is coming off one of the biggest wins of his career. He last defeated Dustin Poirier in his first title defense at UFC 269. He wouldn’t crack under the pressure of ‘The Diamond’. In round 3, he’d choke out Poirier to retain his title.

Later in the night after his win, he’d cross paths with the next title challenger, Justin Gaethje.

Oliveira would be caught off guard by Gaethje being nice to him, as ‘The Highlight’ has said some demeaning things about the champ in the media. Despite what was said in the past, the two would embrace instead of going at it.

After the initial meeting, the former interim champ would chat some more about Charles, saying he couldn’t wait to break his face. Oliveira wasn’t fond of that either.

Talk about drama, am I right?

Gaethje Gets His Shot

Anyways, Gaethje would earn his title shot when he faced off against Michael Chandler at UFC 268. The lightweight war would be regarded as the best fight of 2021, earning Gaethje multiple awards, a hefty $50K bonus and ultimately a guaranteed title shot.

Despite Dana White confirming he’d be next for Oliveira, many thought the top contender would be snubbed of his title shot by Conor McGregor. Especially, since Oliveira expressed interest in fighting McGregor. Well, it looks like ‘The Notorious’ doesn’t have the ‘luck of the Irish’ this time around.

Gaethje will look to be triumphant in his second opportunity at undisputed gold, much like how fellow former interim champ Dustin Poirier planned on doing.

The lightweights will likely meet on U.S. soil, as Brazil doesn’t look to be on the UFC’s radar anymore. Sorry Charles. 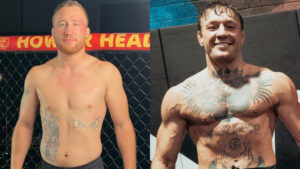