Old Guard vs. New Blood: Masakazu Imanari Takes on Kevin Belingon at One FC: Battle of the Lions

When One FC announced a partnership with Japan’s biggest MMA promotion, DREAM, speculation began to spread like wildfire of the potential fighters from DREAM who could participate in One FC events. At One FC: War of the Lions, this partnership will finally come to fruition and in a big way, as Masakazu Imanari from Japan will make his One FC debut against undefeated URCC Flyweight Champion Kevin Belingon. The two men will meet at Bantamweight at War of the Lions in a battle between the Philippines and Japan, as well as the MMA’s “old guard” against new blood.

If you follow Japanese MMA, you will know who Masakazu Imanari is, and if you don’t, then you are in for a lot of thrilling leg lock attempts. Imanari is known as the “Ashikan Judan” — or Master of Leglocks, and for very good reason — the man knows his leg locks. Over the span of a twelve year professional fighting career, Imanari has a staggering fifteen of twenty four wins by way of submission. Eight of those submissions are a variation of the leg lock, and in any given fight you are bound to see numerous attempts at leg locks from Imanari. To get an idea of how deadly his leg locks are, former WEC Champion Mike Brown met Imanari in the ring in 2005 and Brown’s knee was dislocated, to the extent that his leg was pulled out of the joint and was resting next to the knee joint. If you know Mike Brown, you know that he is as tough as nails and one of the best in the world. 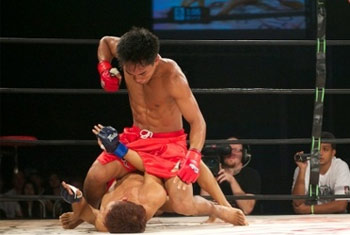 Imanari is also known for his unique fighting stance and his composure in the ring. Don’t look for Imanari to be checking a lot of leg kicks, look for him to be diving for Belingon’s legs to not only put him on his back, but to rip his leg off in the process. Imanari comes with a lot of experience, thirty six fights worth of experience at that, spanning from the minor leagues in Japan such as ZST and DEEP all the way up to DREAM and PRIDE. Imanari has held championships at Featherweight and Bantamweight and fought in PRIDE as a Lightweight, so it is safe to say that he has fought the best in the world at the lighter weight classes and that there isn’t much that he hasn’t seen at this point.

For Kevin Belingon, there can be no doubt that at One FC: War of the Lions he is facing his stiffest challenge to date. Masakazu Imanari is a living, competing legend in Asian MMA, well known as a folk hero for his leg locks and unorthodox fighting style. Belingon himself brings an unorthodox style to the ring, as he is an expert in Wushu, training with Team Lakay Wushu alongside Eduard Folayang and a slew of other talents. Belingon brings explosive stand up into the ring with him, but is also comfortable when it goes to the ground as well, actually holding three submissions of his own compared to only two knockouts in his nine fight-long career. Did I mention that he comes into this fight with Imanari undefeated? Because he does.

He is the URCC Flyweight Champion who has gotten a lot of buzz internationally, even seen as one of the top ten prospects at Flyweight by Leland Roling of Bloody Elbow fame. This is his biggest challenge to date, but Belingon should be ready to go to war and to protect his legs at all cost. A win here for Belingon could not only continue his win streak, but put him on a new level of competition and international acclaim.

TUF Brazil will be aired on the internet for free starting this Sunday
Read Next Post →
Click here to cancel reply.