Oh wow, Shinya Aoki vs. Kron Gracie is going down at Metamoris II, no gi!

I first met Kron Gracie in the Staples Center in downtown Los Angeles for an EA Sports MMA pre-launch party. We both hogged the controllers while everyone eagerly looked at the game for the first time. The owner of RVCA laughed at us because we had no idea what we were doing. It was a button-smashing gallery of mistakes, and somehow Kron Gracie won the chaotic battle. He submitted me off his back with the digital representation of himself in EA MMA. The next night, I ran into Kron at the EA Sports launch party in Hollywood, CA. We talked about his father, Rickson Gracie, specifically the aura that previous fighters claim surround him when he steps in the ring. Kron then went on to break down his entire family lineage as we stood next to the open bar — and it was one of the most compelling things I’ve heard from anyone that was slightly inebriated.

This morning I received a press release and I thought it said Shinya Aoki vs. Kron Gracie in a no gi match. Upon re-reading it did I find that it did in fact state Shinya Aoki vs. Kron Gracie will have a no gi match on June 9th in Los Angeles, CA at Metamoris II, available as PPV. They even made a snazzy poster for the event. Braulio Estima vs. Rodolfo Vieira, Roberto “Cyborg” Abreu vs. Brendan Schaub and Andre Galvao vs. Rafael Lovato Jr is also going down. See you there, West Coasters! 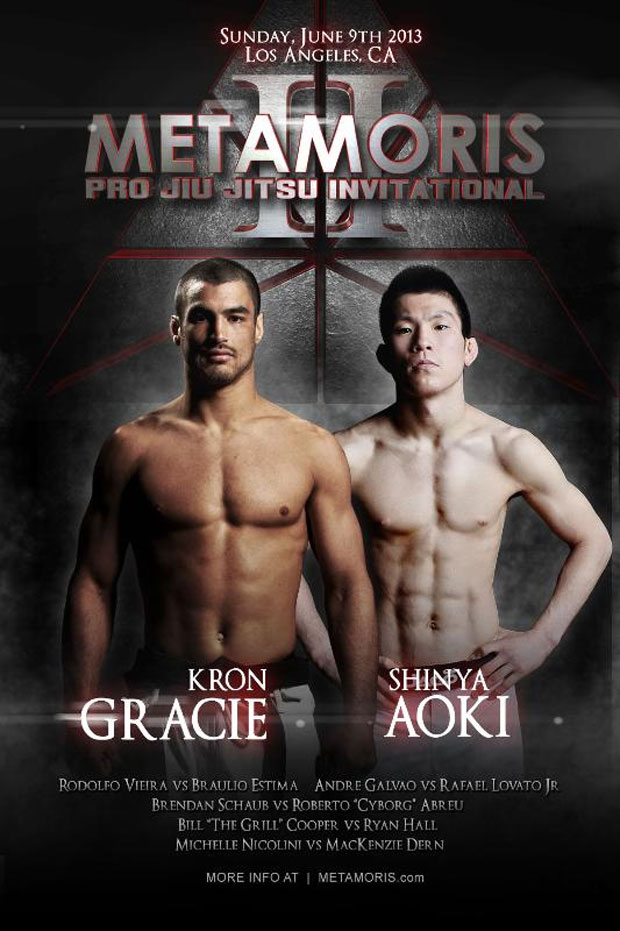 Blast to the Past: Takanori Gomi gets dropped, then graciously picks up the ref's pen
← Read Last Post