You don’t have to believe in the afterlife, string theory or the law of parsimony. However, you better believe that Chael Sonnen will continue to rip on Jon Jones from now until well after UFC 152 is wrapped up in Toronto. Fear is not the only emotion Chael Sonnen can smell. He can also detect hope, as in ‘I hope I don’t get smacked in the face by Chael Sonnen.’ We’re not sure what Sonnen’s relationship is with Jon Jones, but judging from the path of destruction Chael left in his wake after Jones turned down a fight with him — it’s safe to assume that they’re not going to save each other a seat for Thanksgiving dinner this year.

Perhaps all of this smack talk is just Sonnen’s way of honoring the 205 lb champion. I mean, an hour ago Sonnen did name a pizza at his West Lin, Oregon restaurant after the UFC champion. Check out this special from ‘Mean Street Pizza‘ — and it actually looks pretty damn tasty. Props to Phil Whitehair for the find. 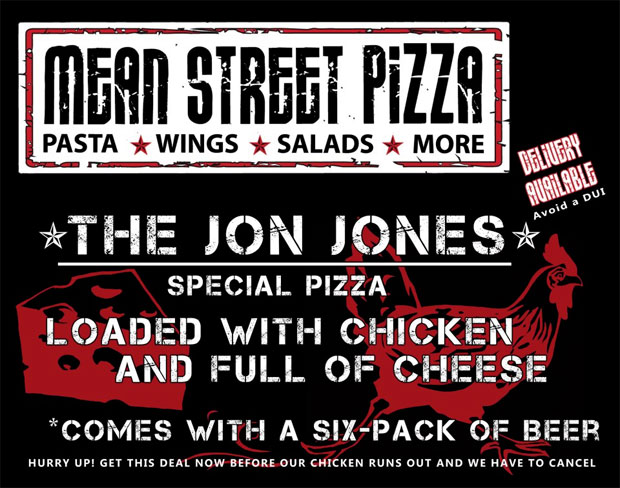