Oh no! Looks like Bellator has cut Dan Hornbuckle and Wilson Reis 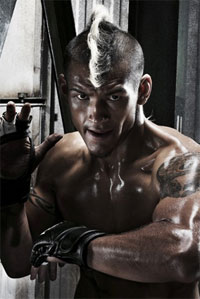 You have to question the meaning of life and the purpose of our menial existence when someone who is known to have a blackbelt in ‘intensity’ and goes by the name “The Handler” is cut from an MMA organization. When not even sporting a hairstyle with the word ‘war’ in its description can save you from the giant blades of the guillotine of MMA, I’m just not sure I can trust the realness of this world we live in anymore.

If you don’t know by now, the fighter I’m talking about is Dan Hornbuckle. He has been cut by Bellator following two losses. One to Luis Santos in September at Bellator 49 and the other to Brent Weedman at Bellator 36. Both losses were via decision and in his entire pro career Hornbuckle has yet to be defeated via knockout. Still, according to an MMAJunkie.com story, Bellator made the decision to release ‘The Handler’ along with former Elite XC fighter Wilson Reis from their prospective contracts yesterday. Reis also suffered two consecutive losses. Maybe two is the evil magical number. It feels like Morpheous should show up at my door with a handful of red pills so that I might be able to be better understand and accept the harsh reality of the giant MMA guillotine. [source]