I just can’t think of anyone who could possibly be more excited about earning a chance to fight Jose Aldo for the title than the actual person who earned said shot, so I had to be a little Captain Obviouc with the article title. I mean its not as though we could call up Kenny Florian or Chad Mendes or any other featherwight and tell them Erik Koch is fighting Jose Aldo and expect them to ‘Diego Sanchez YES cartwheel’ all over their neighborhoods. They’d actually probably tell the caller to ‘(expletive) off!’ and hang up the phone.

Erik Koch is really damn stoked about this fight though, and when MMAJunkie.com asked him about how he felt when he got the call to step in and fight Jose Aldo here’s what he had to say:

“When I found out I got the fight … I literally went into my living room, got down to my knees, and screamed at the top of my lungs…This is 23 years in making, I’ve been doing this since I was a little kid. Just to be here and get a chance, especially against such a dominant champion who is an awesome champion, it’s an awesome challenge. So I’m just really excited.”

The only thing that might come as close to this level of excitement for Erik Koch is him getting offered a free Jimmy John’s sandwich. Maybe not get on your knees and scream level excitement but still exitement because Erik Koch really loves a good sandwich. Just ask him about it on twitter one day @NEWBREED. I could probably never make him a sandwich though, because its kind of a requirement that you get on your knees and scream about it if I do. Really great sandwichs and title shot fights with Jose Aldo are scream worthy events in my opinion. Maybe this face off picture form yesterday’s press cofnerence will help you get ready to scream about the Koch Aldo fight at UFC 149 in Calgary on July 21st. [source] 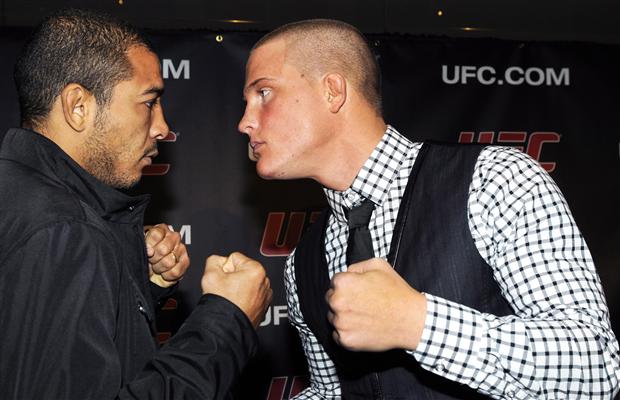 Mariusz Pudzianowski talks about his upcoming bout with Bob Sapp, and it's in English!
← Read Last Post

Josh Barnett refers to The Avengers when asked about joining the UFC ranks
Read Next Post →
Click here to cancel reply.