When you think about couples, that is one thing. However, when you think about a four person chess game, things could get little weird because who would even do that? 50% of myself is talking about UFC’s Tecia “Tiny Tornado” Torres and the bondness she has over her engagement with Raquel “Rocky” Pennington.

In my opinion they seemed like the perfect Bonnie and Clyde with Pleasantville vibes starring Reese Witherspoon surrounded all over social media. Torres was involved in school getting her Master’s degree in criminology while Pennington was like the bread winner fighting to buy her a new house. I mean, I know there are movies on Lifetime Network that could sum it up a bit better, but roll with me here.

Then what seemed like one BBQ later (which probably isn’t true but it is for this story) Amanda “Lioness” Nuñes walked in as the cool girl we all needed so desperately to beat Ronda Rousey. Along next to her side was this Warrior of a lady, Nina “The Strina” Ansaroff. 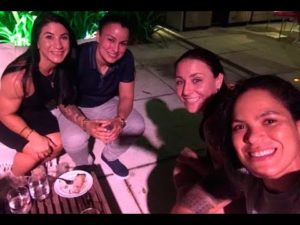 Shy girl with tattoos she was not.

Living in the shadows under Nuñes seemed a bit clear. One spouse would chase their dream as the other followed, then they would switch off. While this is happening Torres and Pennington seemed to have no worries.. yet.

The little engine that could inside of Ansaroff wasn’t as clear from the fog at first because of the boost of Nuñes and the focus being on her. Shifting towards present time, Nuñes made history in becoming the first female double belt Champion. Making the strides coming into America for a dream from Brazil, I’m sure she is making fans proud from all around the world.

Also to no surprise is how open inside the LGBT community she is. There seems to be a lot of marketing profit to foresee since those two belts come from two different weight classes; featherweight and bantamweight. History has been made and there is no doubt about that.

As for Ansaroff, she’s patient enough to have her fights; her time was/is coming.

Or was it Torres’?

While entering into 2016 she remained on a 4 fight win streak through 2017 gaining victories over Jocelyn Jones-Lybarger by submission (her first in the UFC), Angela Hill and Randa Markos (both from TUF 20 alongside the “Tiny Tornado” herself), and the surprising Claudia Gadelha at UFC 231 with a unanimous decision.

That win moved Ansaroff up to #3 in the strawweight rankings. Like geez, look at the time. What is even going on here? I’m into it.

Meanwhile, the UFC fights continued. Torres was doing her thing after she lost her rematch to the current Champion, “Thug” Rose Namajunas. She came through on a triple spinoff against Bec “Rowdy” Rawlings, Julianna Lima (where she got her first submission win in the UFC) and Michelle “Karate Hottie” Waterson where she got her hand raised to a decision after 3 rounds.

As all that is happening in 2017, boo thang Pennington seemed to be bed ridden because of a car accident she was involved in that kept her out for the year. “Rocky” was on a 4 fight win up the ladder for a solid year which involved retiring her former TUF Coach, Miesha “Cupcake” Tate.

Torres was left to be in charge of everything until a mini Cyborg came around named Jéssica Andrade and messed everything up for that household.

A few months later Pennington came around and lost against her best friend Nuñes.

Like damn, that sucks. But then the ping pong effect happened. Torres fought the former 115 lb Champion, Joanna Jedrzejczyk and let’s keep it real, yikes. Moving on back to Pennington, she fought Germaine de Randamie 4 months later and ya.. that would be a no for me dog.

I was just sad for it all.

It kind of feels like going to the mall to take a picture with Santa vs you seeing him on his lunch break, beard and all, overalls hung down, belly out, hairy (ew), smoking a cigarette. I mean, I get it.. trust me. But the reality tv-like vision that was Torres and Pennington being the ultimate was shattered.

Just having slight daydreams of the quiet turns of noise when they put the key in the front door to open it. The sounds of the dogs running around in a vacant yet moodless house filled with tears? Ok. I’ll stop. But, you can’t deny that is some depressing stuff.

Because on the other-side of things you have the other couple duo in Nuñes and Ansaroff kicking ass. Now, with that being said “The Strina” only has so many fighters to get through before she could get her hands on a belt.

I know, I know. She would have to get through Namajunas, Andrade, and Jedrzejczyk. Now if you just take a second with your cup of tea or coffee just think if there was a chance Ansaroff could pull this off do you know what that means?

For the first time in life we would have this epic LGBT advocate lesbian international double Champ Champ and Champ non-Interim Champions of the strawweight and bantanweight division!!!

Now that is insane if you put focus into it. What is even more crazy is the fact, it could actually become a reality. Their goat sanctuary on a deserted island with swimming pigs would be their vibes.

In between the timeline, Torres and Ansaroff could maybe fight each other if the “Tiny Tornado” goes all Kill Bill. Then randomly wants to mysteriously seek revenge.

Or Pennington could wake up one day and realize everything she needs to do to get back to the top and beat Nuñes.

We have all seen Aladdin. Right? There is a certain percentage in the world where you either find a magic lamp where a genie pops out or you just have to face your fears Joe Rogan style.

Until then, the pressure is on Ansaroff now.

Good news is I’m sure Torres and Pennington have never not been invited to the BBQ.

Maybe they say whatever is clever and leave the UFC for the WWE? Form and Double tag team?

This is how Nuñes feels about that idea.

Maybe these are the new Four Horsewomen? Ya.

I’ll see myself out.